on December 05, 2019
So, last week, my sister and I were texting back and forth, and I asked her about the gaming system my nephew uses.  Because I was thinking of getting him a gift card for XBox or Playstation or whichever format he uses, so that he can buy sweaters and acid wash jeans for his Minecraft avatar - or whatever the kids are doing these days.  I had an Atari.  I was decent at Pac Man, but that's about where it started and ended for me.  Even today, I'd rather play pinball.

Side note - once, my parents rented this place in Panama City Beach, and my room had a pinball machine.  It was a fun vacation.  My sister's room had a sign on it that read "Bordello".  She was maybe 11.

Anyway, my sister couldn't recall what kind of system he had, and ultimately gave me his cell phone number so that I could text him.

Allison:  Hey, nephew, it's your Aunt Allie.  What kind of gaming system do you have?  Your Mom said you were having trouble with it - do you still play?  Is there a game you'd like for Christmas, or would you like something else?

So, we were at something of an impasse.  I let it sit for a week, then last night, I sent him another text. 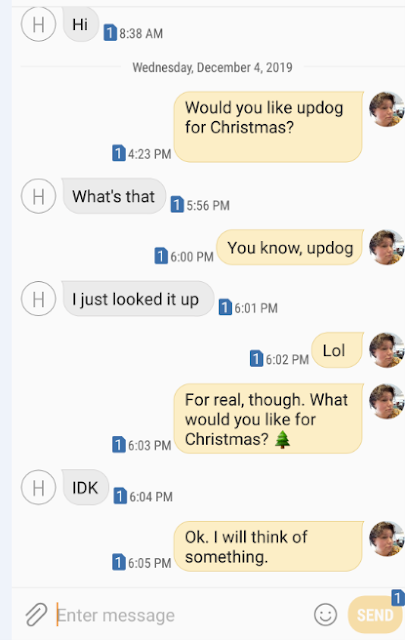 I probably should have done a pre-emptive  Google search on "updog" myself.  If he got the Urban Dictionary definition, that's bad.  They describe it as a sex act involving midgets, rabbits, the Empire State Building, carrots and John Stamos.  And I don't want him thinking that "midgets" is an acceptable term.  Little people is the preferred nomenclature, dude.

Also, I don't want him to think his aunt is pervy.

My intention was for him to reply, "What's updog?", so that I could text back, "Not much, dog, what's up with you?"

This is an old running joke with his mother.  And apparently, I botched it.  Or Google did.  All the other entries for it on Google go with my intended use.  Hopefully that's what he clicked.

Anyway, the bigger issue, at least, as far as I'm concerned is that he has no idea what he wants for Christmas.  I guess, honestly, that it's not a terrible thing - he isn't asking for a ton of crappy stuff that he won't want or need in a year.

But what are aunts for, if not to ply their siblings' progeny with useless, annoying things?

So, now I have to get it together and come up with something.  I need to come up with a variety of somethings for all the someones in my life.

I also need to make pepper jelly, for some of the other someones.

And I need to conquer a mountain of laundry on the futon that desperately needs to be put away.

I mailed off the first and largest batch of Christmas cards last night.  That was huge... I still have a few one-offs to send, but that is a cake walk, comparatively.

Have I mentioned that I'm really not feeling the spirit?

I'll get there - maybe while I'm getting the laundry done.

But here is the advice I would leave you with - get in your mind a small idea of something you would like.  A book you want to read, or some moderate comfort item that you can live without, but would enjoy.  Or a gadget that you think would make things easier.  Some small thing that you don't have.  So that when someone asks you what you want, you can have an answer. Yes, IDK is an answer, but it doesn't solve the puzzle, Pat.

Christopher said…
I can't stop laughing at "Would you like updog for Christmas?" and not because of the Urban Dictionary definition--which I was not aware of and will now do my best to forget--but because it's such a perfect dad joke. Or aunt joke, in this case.
You may not be feeling the spirit just yet, and that's okay, but you're definitely spreading the joy.
December 5, 2019 at 10:23 AM