on November 04, 2019
I had a bad day yesterday.  There were a bunch of reasons, but the biggest is that some plans I am trying to make are in upheaval, and there's no one way to sort it out that doesn't inconvenience, disappoint, or frustrate at least one person in the equation, and in most cases, everyone in the equation.

I don't work well with disappointing other people, let alone being disappointed myself.

On top of all that, I ended up coming across this artifact of a different era, and every time I thought about it, I was moved to tears.

The item in question was/is this sweater: 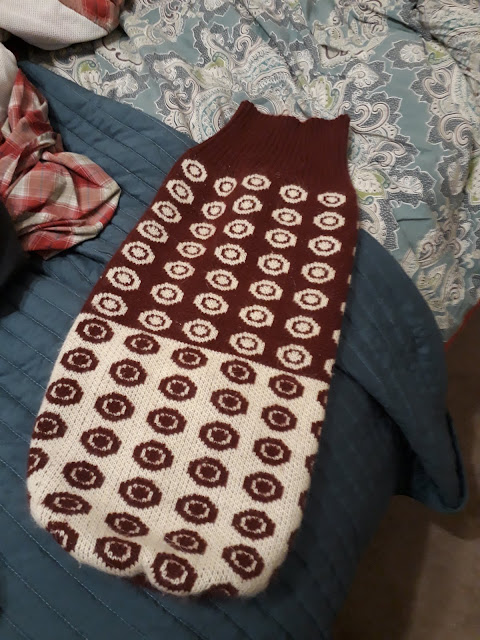 I wasn't crying because it's ugly, though it truly is.  My father gave it to me for the late great Lola.  He took special joy in just how ugly it was.  Lola, in my opinion, was a fine looking girl, and Dad loved her - as much as he could love a dog that wasn't specifically his, at any rate.  He was good to my girl, and she adored him.

And of course, coming across this made me miss them both pretty acutely.

We're walking into the giant wall that is THE HOLIDAYS.  And honestly, the aforementioned plans play into that, at least in a small way.

It's hard to even function around the idea of the holidays.  For one, it's basically warp speed from now til the end of the year - and after that, it's going to get even crazier.

Or maybe, we'll all decide to be measured and take things super easy.  Hint:  we won't.

Anyway - I saw my Nurse Practitioner this morning in order to get my prescriptions released.  The nurse doing intake asked me what triggers my anxiety and depression.  I looked blankly at her for a second, and said, "Well, it's a chemical imbalance in my brain, so...".  I mean, yes, there are conditions that exacerbate it, but trigger it?  No.   I hate that going to the doctor's office makes me immediately combative.  But that just seems odd.  Odd, I tells ya!

Anyway, they're testing my panels or something, and I expect we're in good shape.

So, I guess by default today is better.