on November 06, 2019
Here at the Hallmark Channel, we recently received some market research that 30% of Americans do not identify as Christian.  From that, we have to assume that not everyone loves Christmas. In fact, we have further learned that some people who do celebrate Christmas don’t actually enjoy it.  Rather than alienate 1/3 of our potential viewership for the next two months, we would like to offer some alternative holiday movies for those of you are overwhelmed, depressed, or who may not fa-la-la-la-la-low the teachings of Christ: 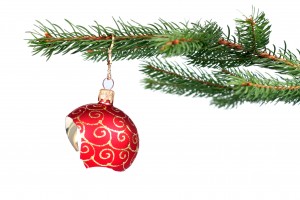 The Assimilation Simulation:
Amir and Zahra moved just moved from Cairo to Houston, and they definitely don’t want to stand out during their first December in their new country. As they work their way through a month of hilarious “celebration”, they learn that the best things about the holidays aren't things.

Holly's Hanukkah Ham:
The handsome new boss is a Jew? Oy vey! What's a Shiksa to do? Holly has eight days and nights to find out.  Will love conquer gants, or will she end up with nisht?

Desperately Sikh-ing Santa:
When the town’s resident Santa is hospitalized with a broken hip two days before Christmas, reluctant local shopkeeper Pramit Singh is the only man who can fill his big boots. This fish-out-of-water tale shows us that being Santa takes more than a great beard. It requires a big heart!

The Mistletoe Loophole:
Tough-as-nails lawyer Marcy Starr says she's an atheist, but she also celebrates Christmas. New-in-town investigative reporter Josh Pines is determined to find out why. Will her objections be overruled? Will he get an exclusive on her heart?

Salvation for Uncle Steve: Steven Cane refuses to go to the Christmas Eve services with the rest of the family.  His concerned niece Candy wants answers.  She digs deep through the town library’s extensive newspaper archives and learns that some things are best left unspoken. And to trust her gut.

Miriam Greene’s Meet Cute: Even though she’s Jewish, all she wants for Christmas is a date for New Year’s. This hysterical, frenzied farce follows Miriam’s quest for a romance that sizzles like the oil her bubbe uses to fry latkes.

Saving Solsticetown: Mary Albright returns to her quirky hometown, where they celebrate every day like it's the shortest one of the year. She's back to save her family's marshmallow business. Will her old flame, Safety Inspector Kyle Sparks be the reason she decides to stay?

The Agnostic's Christmas Puppy: When Joy Weeks finds an abandoned puppy three days before Christmas, she is forced to reckon with an ethical conundrum: All dogs go to Heaven, but what if there is no Heaven? She takes a spiritual journey and realizes that some things, like love and distemper, can't be seen but still exist.

A Kwanzaa for Mrs. Rhodes:
Marcus Frost is a successful businessman with a haunting past and a dark secret. He makes the long journey back to his hometown to make amends with his 11th grade English teacher who taught him to care. And how to read.

A Town Without Tofurky:  Merry can’t wait to meet her future in-laws, but will a pair of church-going cattle ranchers accept a secular humanist who doesn’t eat meat as family?  Will they slaughter her with kindness, or was the whole thing a huge mis-steak?

Cadestown Memorial's Once-A-Year Family: Christmas Day at the hospital is, in many ways, just like every other day.  But on Christmas Day, all of the town’s Hindu, Muslim, Jehovah’s Witness and Jewish population come together to care for their patients.  Throw in a few people who celebrate Christmas but don’t have kids, and you have an ordinary day that is unlike any other.

That House With No Lights:
When Claire Bowes’ husband Jack skipped town, leaving her broke and broken, Claire thought she had hit rock bottom.  Then her company laid her off without severance.  Can a group of neighborhood kids use their wacky hijinks and Christmas spirit to lift Claire out of her spiraling debt and crippling depression?

Polar Opposites:
Nine-year-old Noelle misses her mother most at the holidays.  She decides to make the trip to Santa’s workshop to get herself a new mother for Christmas.  Instead of reaching the North Pole, she ends up at The Pole, a gentleman’s club, where she meets Vixen, an entertainer with a heart of gold.  Noelle’s father, Nicholas, can’t say no when his little girl invites Vixen to Christmas at their house.  Bells will be jingled and presents unwrapped in this heart-warming, pulse-racing classic!

*As you may have guessed, this was a no thanks from McSweeney's, but I still think it's hilarious, so I'm posting it.

Christopher said…
I'm shocked that this was a no-thanks from McSweeney's, especially since these are the only Hallmark holiday films I'd be truly tempted to watch.
Now I'm thinking it must have been turned down because it was a little too close to reality.
November 7, 2019 at 8:33 AM