Fans and their Opinions

My alma mater, the University of Georgia shut out University of Kentucky at their homecoming game.  They played in a torrential downpour, and based on live accounts from friends who were there, it was as wet and miserable as it looked.

Meanwhile, just down the street, Vanderbilt beat Mizzou - and Mizzou is ranked.  Vanderbilt is not.  They had only won one other game this year.

Finally, a player from LSU got half pantsed on national TV.  I didn't see it happen, but thanks to the magic of YouTube, I saw it.

Of course, cue the outrage from some of the more puritanical fans on Facebook.  I had one friend comment on how inappropriate it was to replay the pantsing, and to show his butt on television.  Another friend of ours chimed in on her comment...

We see all kinds of violent, bloody, career ending injuries in sporting events.  I saw a linesman get hit in the head with a puck at a pre-season hockey game once.   I've seen joints dislocated, bones broken, heads concussed, teeth dislodged.  A kid from Georgia Southern was paralyzed in a game against UGA.

I do remember in high school my father not wanting me to see Platoon, because it was so violent.  I never did.  Or Full Metal Jacket, or Hamburger Hill.

Now, I have seen Tropic Thunder, and it was delightful.  I've sat through Apocalypse Now (well, bits and pieces), and I thought it was boring- except for Robert Duval, who is an American Treasure.

Anyway.  My point is this.  A twenty year old kid shows a little crack on the TV.  It's not an outrage.  It's a blip on the radar.  Life is long, and we'll all show our asses in one way or another.  Some of us more than once.

That's who we are and what we do. 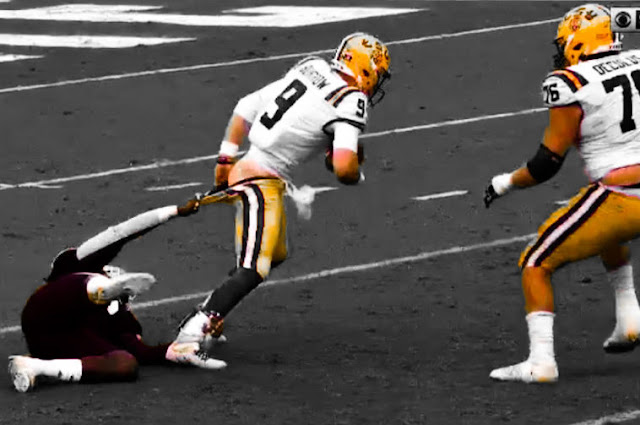 Christopher said…
There's much less of a distinction between "regular TV" and "cable" than there used to be but I remember people expressing everything from horror to amusement that a movie like, say, Fargo would be shown on regular TV with the f-bombs replaced with the words "fruit" and "frozen" but the horrific violence left in place. And I've known more than one mother who's said she'd rather her kid hear a swear word or see a butt, or even a nipple, than a murder.
Priorities. We really need to get 'em straightened out.
And that player getting pantsed was pretty funny. Even funnier than Vanderbilt winning.
October 24, 2019 at 8:22 AM