Masters of the Universe

on September 20, 2019
Recently, I have been tasked with researching and writing a presentation about Motivational Interviewing.

Motivational Interviewing is a technique used by practitioners and clinicians to interview their patients about making behavioral/lifestyle changes.  It was originally used in addiction/substance abuse patients, and the process has spread to other types of medicine.

Dr. Jones:  Well, Pat, it seems like you rely on smoking for time to yourself, away from the pressure of a stressful life. You know that your chest pains may get worse, but the stress relief  outweighs your concern.  And it may be that you'll be a smoker for life.


Pat:  Oh, I mean - I know I need to quit eventually, but I just don't see it happening right now.  Plus, I've tried a few times before and the longest I went was three months.

Because it's our nature to correct what we believe to be true about us.

Now, it sounds simple - basically reverse psychology, right?  But it's effective.   And it takes practice, and it's time consuming, so a lot of doctors find it easier to say,  "Pat, if you don't quit smoking, you'll die."  At which point, Pat puts up an emotional wall, and might as well get up and leave.

So, anyway - that's what I've been working on, and it has been really interesting.

I took a Sociology class in college with Dr. Findlay.  It was a huge lecture hall, but I thoroughly enjoyed it.  I remember that it met about five minutes after the OJ Simpson verdict. I watched the verdict in the Journalism Library (the Drewry Room), and walked upstairs, and across the plaza to the Psychology lecture hall.

The Psychology building and Journalism building were right next to each other, separated by a plaza - the whole space was know as the P-J plaza. 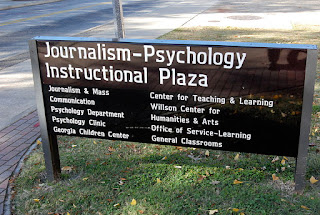 Speaking of buildings at UGA, there's one that's always good for a giggle: 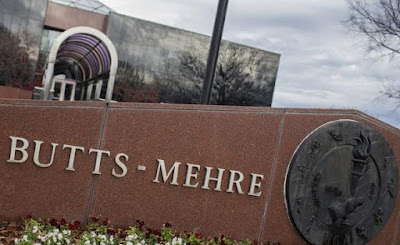 Named for Wallace Butts and Harry Mehre.  But colloquially called "Buttsmear", because come the hell on, of course you're going to call it that.

Much like Brumby Dorm is the Virgin Vault (all women's dorm at the top of the hill). Much like nobody calls O-House by its full name (Oglethorpe, after James Oglethorpe, founder of the state of Georgia).

It's just one of those things.

Anyway, the OJ Simpson verdict came in, and right after that, Sociology started.  The class was a fairly diverse group, and everyone had feelings about what had just gone down.

Dr. Findlay walked in, oblivious to the verdict (or at least he convincingly pretended to be) and he started his lecture.  Right after that, I walked off-campus to the downtown GAP, where I purchased a brown fabric messenger bag.  It's weird what you remember.

I also remember skipping his class one rainy day to talk my sorority sister's lovelorn ex-boyfriend off a ledge - a metaphorical ledge.  It was awkward because I would not have minded dating him, and I felt that was probably pretty obvious.  I had crushes on several of my sisters' boyfriends because they were safe, vetted and unattainable.  Just like I liked 'em.

Anyway, I loved Dr. Findlay's class so much, I took another Sociology class.  This time, Contemporary Social Issues.  My advisor said it was a great class to dovetail into my Journalism Major.

Well, I'll describe that experience by way of a Matt Groenig Life is Hell comic strip - the 9 Types of Teacher You'll Have in College. 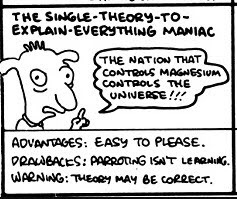 She believe that every contemporary social issue - everything from homelessness to poverty, to race relations to AIDS and so on, was a "Feminist Issue".  The answer to all our problems was "Cherchez La Femme".

Now, I'm a huge feminist, and I was in college, too - and yes, sorority girls can be feminists.  The founders of my sorority were old school feminists, but that's not the point at the moment.

As a feminist, I thought she was rather full of shit.  She alienated every guy in the class, and most of the girls too.  I remember two things about the class.  One, I was in the class with a few guys from a fraternity we did socials with, and this would have been around the time that I was seen kissing one of their brothers at a party.  I was therefore introduced at "The girl who kissed (his name)".   I also remember that one of the students in the class came out on National Coming Out Day.  I think we already knew he was gay, but he made a thing of it.  I think I was reasonably non-reactionary to it. I think I was like, "Right on, let's get to the lecture."

I might not have been the best LGBT ally in college.  Or the best student. Or particularly picky about the boys I kissed.

Of the two Sociology classes, I found one useful.

And I say all of this as a rambling entree to the thought that I wonder if I should have gone to Grad School.  Several people have said, "Oh, it's not too late!"  But I disagree.  I think maybe 10 years ago would have been the time.

Truthfully, the types of advanced degrees I'd be interested in are not especially marketable.  And I don't have the old money to be a dilettante.  More's the pity.

Anyway, I'll keep you posted on my Motivational Speaking, keep on keeping on and remember - Life, is a Feminist Issue.