on June 27, 2019
The house across the street is under renovation.  The man that used to live there moved out, well, we think he was told to move out - it was his sister's house.

Since then, they tore the thing down to the studs and rebuilt - it went from being quite rundown to a real showpiece.  They added on, as well.   One of the most recent additions is a fence around the perimeter.  It's lower in the front yard - maybe knee high - but on the sides and in back, it's your typical privacy fence.  They white-washed it, and it was really pretty.

On Sunday, I noticed that someone had splashed paint on it - gray paint, and it looked like an inkblot.

I mentally filed it under "this is why we can't have nice things" and then went on with my day.

Yesterday, when I got home, I realized that the gray paint hadn't been an act of vandalism: 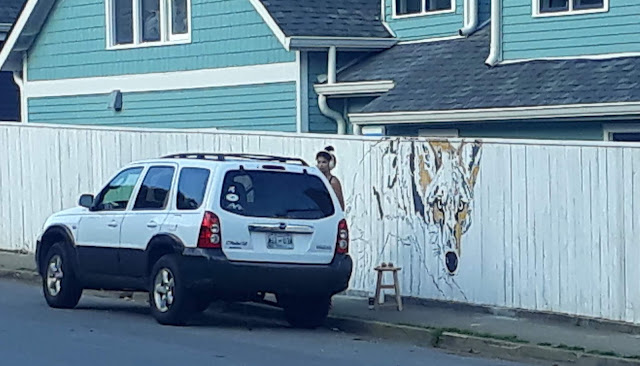 Apparently, we're getting a mural.  I'm undecided as to whether this is a wolf or a coyote.  They're similar enough that I don't guess it matters.  Except maybe to the artist, who has a definite vision and isn't just up their painting feral canine all willy-nilly.

Nashville is home to dozens and dozens of murals, and I'm good with that.  But there are some styles I prefer... I think this would be nice for a residential area: 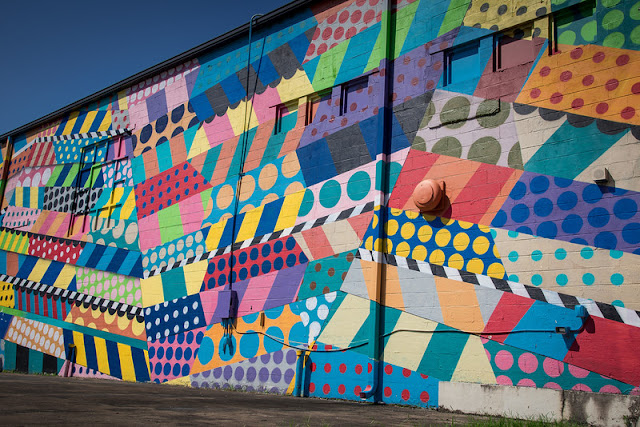 Art is all a matter of taste.  But I'll wait til it's finished, then I can make my final assessment.

So, that's where we are in terms of our neighborhood.

Piper and her pup friend are still having fun playing out in the summer evenings... they're precious, and I am enjoying it immensely.

I bought a few Home Chef Meal Kits at the store this week - it was an act of self-preservation, I just needed to get food that wasn't takeout, and I had about 20 minutes to shop.

I did the first one last night - it was chicken with a ginger/green onion glaze and some coconut carrots.  It was good.  It was good.  I loved the idea, and I really liked the portioned out ingredients.  Could I make it on my own?  Yeah, for sure.   And I might - but it was a time saver, for sure.  But there was a ton of packaging.  No food waste.  And the price per serving is probably a little high.  Still cheaper than eating out.  Anyway - it might be something I lean on if time is tight, but it's not going to be a new lifestyle.

So that's the latest from here. I'm thinking I may hit up the Farmers Market this weekend.  Be my own little chef.

I also need to get an oil change, maybe get the brakes serviced.  Yvor is about to hit 100,000.  He needs a little love. What car doesn't, though?

Thankfully, I slept well last night, and enough, and didn't have weird dreams about cats in jars and whatnot.