on May 17, 2019
The mother of one of my former bosses died this week.  Which is sad in a million ways.  He's a good guy who took great care of her, and had a good relationship with her.  Now he will need to keep an eye on his father and the rest of the family.

He was my boss when Dad died, and I remember him texting to see if it would be OK if he had food sent to my mother's house.  It was.

And he did.  He knew people in Atlanta.  Good people.  He had lived there.  This is the guy who was college friends with some of my old improv pals.  So, we were connected.  The food was from one of the fanciest caterers in Atlanta.  We ate well, my friends.

I sent flowers, as one does.  But he lives in Charleston, and what do I know about florists there?  And that's why we have the internet.  I found a good florist, and after they arrived, he posted a picture on Facebook.  Whew!  They did a great job.    My advice to you (all of you) is that if you ever receive flowers, text a photo to the sender - because we're on the other end hoping they didn't throw a bunch of heavily dyed carnations in a mason jar and call it a day.


So, anyway - he has been on my mind.  He gave me the space and time I needed to take off and take care of business.  I hope the people looking out for him do the same.

In lighter news, the babies have arrived!!! 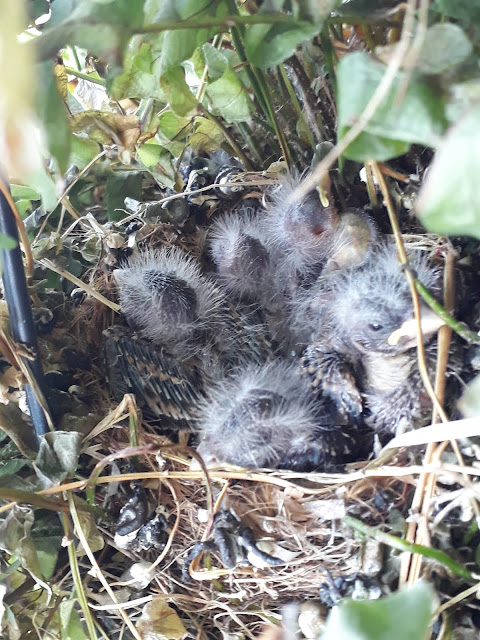 They look a little annoyed, and who can blame them.  They're kind of crowded in there now.  Looking at the amount of feathers on their wings ,as well as the state of the nest, they've been in there for a bit.

I first found the nest/eggs on April 27th.  Given the tininess of the eggs, relative to the size of these massive toddlers, I have to think they hatched around the first of May.  Here we are, May 17th - these are some big ass birds.    Mom isn't even cold chilling in the nest with them.  She's keeping guard in a nearby tree.  I get the feeling she's done with them.   If my calculations are correct, they'll be out of the nest by the end of the month.  If the fern can recover, great.  If not, well - this has been worth it.  There are four of them, I think.

If nature doesn't impress you, then I can't help you, either.

We're coming up on a weekend - I am hoping for some sleep, because I am still kind of residually tired from my late 30s.  I know I need to get my clothes in order and figure out what I have, and what I still need.  Which is ridiculous - but you know, Barbie needs a wardrobe for her many, many activities.

May your nests be well feathered and not too crowded, folks.  Have yourselves a great day!