on April 30, 2019
Three weekends ago, I bought a pair of Boston ferns for the front porch.  Within an hour of hanging them, I noticed a happy couple having an open house there.  Apparently, they liked what they saw, because they have decided to make it their home for the short term.

The couple in question are House Finches.  They are kind of notorious for this behavior.  They don't like trees, shrubs, or the like.  They want to be where the people are.  At home.  So, it's not entirely surprising that it happened.  Dad used to get nesters in his ferns, as well.  If it came down to it, he would sacrifice the plant for the greater good of the bird and her babies.

Anyway - I waited awhile, and I was rewarded with the opportunity to take a picture: 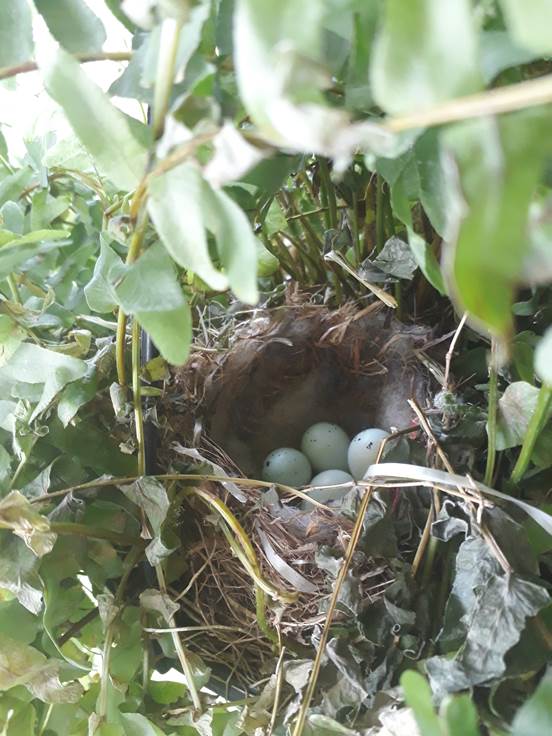 Isn't that just gorgeous?   It's all perfect and fluffy and safe looking.  You can't see it that well, but there us a Starburst wrapper at about 3 o'clock near the eggs.   You know, just a pop of color.

Anyway, that's my happy for the foreseeable future.  We'll lose the fern, but in return, babies!

Speaking of babies, Piper turned five yesterday.  I know this, because when they transferred ownership of the microchip from her previous crew to us, the birth date was on record as April 29, 2014.  That checks out with the rest of her timeline, so why not?

Here's the interesting thing.  Thanks to Facebook, I know where I was and what I was doing on April 29, 2014.  I was having a shitty day.  It was a month after Dad's funeral. I was in Elmira, New York, working with a new customer on a pre-implementation gap analysis/consultation.  We had some dumb name for them, with an equally dumb acronym - I've texted Jim to remind me.  I'll let you know what I hear back.  But anyway, we were there, we had gotten all of the information. Process Discovery, thanks Jim.  Anyway, we had the PD, and were done.  But we still had a day and a quarter left. So I suggested we just get started configuring and setting it up.

But lo, and behold!  My administrative access had been pulled.  So I called our people back at home, and got crazy amounts of push-back.  I was not allowed to start on it because we had scoped out config as a separate contract item.  I argued that the sales person had over-estimated the time needed.  This was the start of the era with a new head honcho (she didn't last), and her minions were very rigid.  I got in a little trouble for being a PITA.   So I now had to kill a full day with these lovely people and couldn't do anything for them.  They were paying my way, and I had nothing to offer.  I was there with a colleague, and he attempted to use his gravitas, to no avail.

When we got to the car that afternoon, I started crying because I was so frustrated.  We kind of pulled it together and went to a cemetery where I saw the graves of Mark Twain and Hal Roach.  We had pasta for dinner.

I don't remember how we got through the next day, but I do remember going to the airport, and learning that my flight was going to be delayed, which could compromise my connecting flight.  I knew I had to get in a car just as soon as I landed and drive to Chattanooga for the next morning.  The guy at the ticketing desk said, "Let's avoid that - I'm going to send you directly to Chattanooga.  And he didn't charge me.

I also remember sitting in the Detroit airport and getting my hand slapped by my boss for pushing my agenda too hard.  He suggested I cut back on my trips. The one he suggested was my annual "fun" trip to a conference where I was presenting.  I remember saying, "That's the one trip a year I *get* to do as a reward for all the trips I *have* to do."

I remember calling my mother and crying.  I remember her offering to meet me in Chattanooga to help "take care" of me.  I told her she didn't need to do that, but the fact that she offered meant everything to me.  That was more than enough.

I remember the place in Chattanooga (well, Cleveland, really) made pool chemicals, and I had to wear, at all times, a cross-body bag that contained a gas mask, in case shit went down.  I remember totally blanking out at some point while working with the customer, and apologizing and telling him my father had just died and I was a little dazed.  Super professional.

Then I came home.  I guess I rented a car?  Or maybe I drove the one I got from the Chattanooga rental.  Yeah, that's exactly what I did.  Because I stopped the car in South Douglas to join a conference call.  At a McDonald's.

I was in a bad place.  It would get better and worse over the coming months.

But on April 29, 2014, the universe set into motion a plan that would involve a few plot twists, but would ultimately end up with me getting my doodlebug.

I did end up going to that conference. The fun trip.  It was fine.  Not great, not bad.  It was fine.  I remember kind of being in a daze for much of it.  I remember one of my colleagues helping me with something, and commenting that "they" (our managers) were worried about me.  I remember telling him that if "they" were so worried, "they" could talk to me directly.  Maybe that's what I said.  I'm sure it's what I thought.

But all of that was a lifetime ago.  Piper's lifetime.  Nine months later, she became ours.   A gestation period of sorts.

Now, it's five years later - the memories are distant and not especially painful to remember.  I hate that I was so unhappy - mostly because of Matt and Mom.  I know it was harder on them than anyone (other than me - because it was hard as hell on me).

And because of my family, dog, friends, therapy, medication, and the passage of time - I am in the best place ever.  My nest is build, filled with warm fuzzy and family.

What shall I hatch next?