Once upon a time, when I was eleven, my mother and I were in New York City, riding an elevator in the World Trade Center.  We were on there with a load of businessmen of some international origin.  Back then, I could not have distinguished languages, but I feel like they were either Russian or German.  It doesn't matter, except that we didn't understand them.  They were speaking animatedly, then one says in English, "Chicken soup!  Chicken Soup!" And then they all busted out laughing.

To this day, my mother and I will imitate this, and one other quotable quote from our trip.  Another elevator - this time at the NBC building.  There was an ad on the door for Highway to Heaven.  And some bland soul sighed and said, "That is the best show, I hope they never take it off the air."   Even at that age, I knew it was crap, and later, my mother and I concurred that the person who uttered that statement was an idiot.

Basically, we don't need the joke, because the punchline is all that matters.

Story number two.  Within a year of that trip, I was stressing out about something trivial at school - I think it was the rehearsal schedule of the musical we were putting on - Oliver!  I was an orphan/townsperson/etc., etc.  And I was there late daily.  I loved it, but I was also an anxious pre-teen (who grew up to be an anxious adult), and I was fretting about it.  Dad told me a story about a boy - a prince, if I remember it right - who was born with a golden screw in his bellybutton.  And all these doctors came to look at him and decided he was perfectly fine, and so he goes through his life healthy but fully unsatisfied by the lack of explanation surrounding this golden screw.  He gets an education, begins to travel around the world, and finally meets a mystic in Tibet who takes a look at the golden screw, nods and comes back with a screwdriver - the handle is encrusted with jewels and the blade is shiny silver.  He carefully inserts the end of the tool into the slot of the screwhead, and gently turns it.  Once.  Twice.  Three times.  The screw comes out of his bellybutton.  And the guy's ass falls off.

As these things go, it wasn't the most helpful advice.  I don't know if I laughed, because, you know - I was still anxious.  I think that the moral, at least as my father saw it was, don't worry about insignificant details - at least your ass isn't falling off.

The last time I was in Atlanta, I was thinking about Dad, as one does, and looking through the desk in what was once my childhood bedroom, then became his study, and is now a guestroom where Henry sleeps from time to time.  I saw a small drawer with maybe a dozen small screws in it: 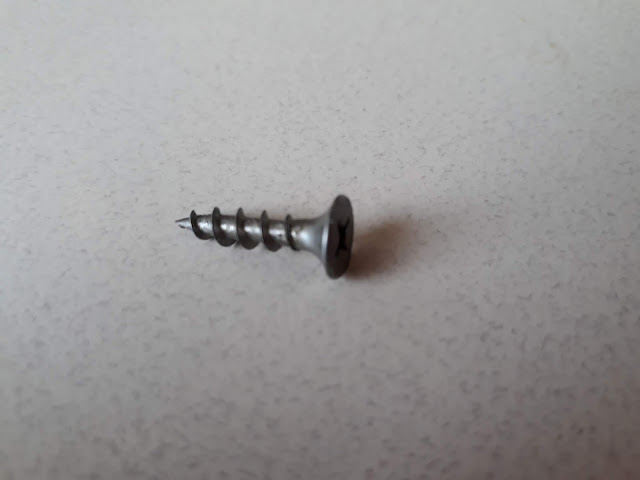 And so I liberated one.  I plan to somehow (Sharpie) gild it, and keep it as a reminder that no matter how bad things get, my ass has not yet fallen off.