Friend of a Friend of...

But whether you follow Fahrenheit or covet Celsius - that's warm for February.

On top if that, the night before we had four inches of rain.  Which is a lot of rain in a short period of time.

I made a comment on Facebook likening the weather to that of Kansas in The Wizard of Oz - pre-Emerald City/Munchkinland.

I am going to make a very unpopular statement here.  I don't love The Wizard of Oz.  I don't.  I think it's kind of weird, exploitative and creepy.  Here is this young woman who gets harrassed about her dog, then a massive storm comes and she gets knocked unconscious by debris. She has a concussion dream and wakes up surrounded by people.   Now, here's the thing.  Dorothy is not a child.  She's probably fifteen or sixteen (or supposed to be that age), and it seems creepy to me that the farm hands watched her sleep/dream.   Yes, I'm sure they were worried, but realistically, Auntie Em should be in the room with her, and she can call the menfolk in to see her once she's awake.  I'm not a prude, but this was 1939, and it seems a little odd to me.  I'm overreacting, yes, yes I know. 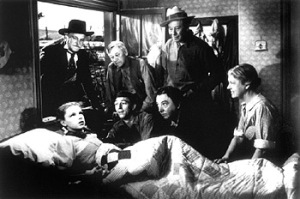 It's a fine movie.  It's just something that I've seen and never need to see again.  I saw Wicked.  Same.  It's one of those movies that just gets a lot of love, but I'm over it.  See also:  Gone With The Wind.  Technicolor Overload.

Honestly, when I think of GWTW, I think of Carol Burnett's version.  CLASSIC.  CLASS.  IC.

I have also gotten my fill of The Sound of Music, Mary Poppins, and all of the Disney Princess Movies.  Sure, The Little Mermaid had some catchy tunes, but I think we all want to know how Ariel kept the shells on.  Carpet tape?  Glue?  Crab claws?  TELL ME!!!

It's not that I reject movies about young women coming of age.  I loved Parent Trap (both of them, but really - Lindsey Lohan was PRECIOUS).  I quote Mean Girls all the time.   Anne of Green Gables (the Megan Follows/Colleen Dewhurst version, obviously) was a joy, and who doesn't have a crush on Gilbert Blythe?  Poor dear departed Jonathan Crombie.  I got to see him on Broadway.  SCORE!  And I have nothing against Julie Andrews, per se.  She was delightful in the Princess Diaries.

It's just that some of the classics got such heavy replay in my childhood, I am done with them.

And I know Judy is something of an icon for my gay male friends (of Dorothy).  But even some of them don't get her appeal.  I did enjoy her daughter's work on Arrested Development.

I think that as a kid, they'd play the same movies every year around the same time, with very little variation.  So, it was easy to burn out.  Although, I could watch Airplane annually, maybe more.  Same with Where The Boys Are - though they are both way shorter.  And fewer songs.

Of course, today it's back in the 30s, like you would expect for February.  And I'm not thinking of Dorothy, or ruby slippers.  I do have some hot pink fleece-lined slippers that are quite perfect for today.

I seem to be picking up a cold.  Matt brought it home, and he's an aggressive sneezer.  I honestly think he uses his sneezing to release small pockets of anger.  The "choo" of his "achoo" is practically a shout. When you live with another person, it's hard not to pick up what they're laying down.

I got my flu vax, so my hope is to avoid that altogether.  Small colds aside, we've been pretty disease free as of late.  Matt seems to pick up colds more than I do, but at least we don't get the kid germs like some of my parent friends do - they seem to keep a running illness.  Living in a sorority house led to that kind of thing, too.  Although, I was typically able to confine myself to one major sickness a year - usually between Thanksgiving and Christmas.

Anyway, it's a cold, not gangrene.  This too, shall pass.

I did have an appointment at the doctor this morning - my annual female parts visit.  It was non-eventful.  As much as it will be, anyway.  I have my mammogram next week, and I expect the same from that.

The older you get, the more you get an ingrained routine.  It doesn't really feel like it's been a year, but then I've almost been at my "new" job for two years.  It's crazy, the passage of time.

This weekend, I have what I hope is a small home repair project.  My ceiling light in my bathroom has come loose.  It's time to replace it.  I don't mind connecting black to black/white to white and capping them with wire nuts - I've done it.  Just turn off the power, first... I know where the fuse box lives.

It's supposed to rain again starting again on Sunday.  It'll be all good.  I think.  In addition to the DIY fest, I'm going to get groceries, do some housework, let Piper roam freely about the back yard.

And watch for airborne debris.

Christopher said…
What bugs me about the film version of The Wizard Of Oz is that in the book Oz really is a real place, although I guess that would have been too far out for audiences at the time. Although I also feel I have a new appreciation for Bert Lahr singing "If I Were King Of The Forest" now that I know it's a tribute to Gilbert & Sullivan.
Anyway I hope Piper enjoyed the Saturday sunshine.
February 11, 2019 at 12:35 PM