on January 25, 2019
So, I've started drinking coffee in the morning, using the theory that it has to be a little better for me than diet soft drinks.  I am still occasionally having my carbonation, but for the most part, it's coffee and water.

I'm not sure who makes the coffee I'm drinking - I get it from the office break room.  But what I can tell you is, it's strong, dark, and bitter.


Which of course reminds me of the scene in Airplane, a movie I never tire of: 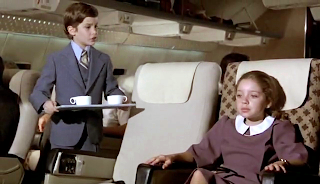 I typically take mine with cream and a little sweetener.  I am fine with Nutrasweet or Splenda (blue or yellow packet) but typically go for Stevia these days (green).  I draw the line at Sweet 'n' Low (pink).  I have standards, dammit.

When I was in college, there were, to my recollection, basically three coffee shops - one whose name eludes me, then Blue Sky and Jittery Joe's.  Blue Sky was my favorite, though I rarely drank coffee.  Blue Sky had a set of roll-up windows as their store front, and when it was nice out, they opened the place up.  I remember once going there with a guy who had just been dumped by one of my sorority sisters and wanted to talk about getting her back.  And I kind of had a crush on him, so I went.  I skipped Dr. Finley's Sociology 101 lecture, and it was cold and raining like mad.  Sorry to Dr. Finley, to my sorority sister, and to her ex.  I wonder how/where he is now.  I can only remember his first name, so I can't stalk him.  Bummer.   At last check in, she was living overseas.  Hong Kong?  Japan?  Oh well.

After I graduated from college,  Starbucks became a thing. I would get a skim latte there from time to time - hot in the winter, iced in the summer.    Then I switched over to Dunkin's iced coffee with skim, because it was cheap and convenient.  But really - none of these were a go-to for me.  I was a Diet Coke/Coke Zero/Diet Dr. Pepper drinker.

In fact, I drank a ton of coffee my sophomore and junior years of High School, at IHOP, of course.  I realized it made my stomach hurt, so I backed off.  As a senior, a Diet Dr. Pepper was often breakfast. And I wonder why I was thin in High School?  Whatever.

I have never been a habitual "gotta have my coffee" person.  Even now, I do it at the suggestion of the plan I'm following - not because I feel like I NEED it or I'll die.  I ought to pick up a Soda Stream and have a massive cold fizzy water every morning - I get the water, the cold and the carbonation to wake me up.  But counterspace is at a premium, so I guess I'll make dew with my current routine.  Coffee, strong enough to chew, and my massive tumbler of water.  I try to get one in by 11, and finish a second one before the end of the day. 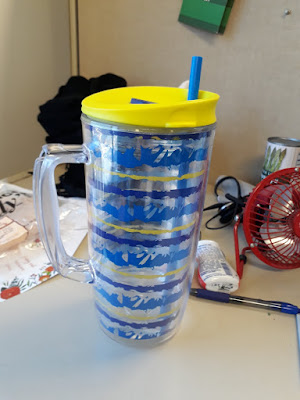