on January 22, 2019
Over the three day weekend, I went on a Netflix mini-binge.  I watched the first season of an animated show called Big Mouth.  It chronicles the lives of a group of precocious seventh graders as they navigate puberty, adolescence, and all of the humiliations thereof.   It's a little bit fantastic, because two of the main characters are Hormone Monsters, and they are, as you might imagine, larger than life and forces to be reckoned with.

That said, it is a funny, funny show, voiced by a lot of people I find very, very funny (Jordan Peele, Maya Rudolph, John Mulaney, et al.).  It is also painful, because for anyone who remembers what it was like to be 13, it hits home.  Right in the gut.

It should surprise no one that I was a little awkward in my middle school years.  My skin, for the most part, looked good.  I had braces, but also the crazy hair that did whatever the hell it wanted to do.  I didn't really know how to wear makeup, though I did have some BRIGHT PINK LIPSTICK that I would wear from time to time.  I honestly still have some - I wore it to my father's funeral because I think it's all I had with me at the moment.  Also, kindly remember it was the mid-to-late 80s.  Clothes were... hideous.  We had so much acid wash.  I wore Keds with scrunchy socks in the colors of the day (to match the outfit, obvs.) .  We also wore docksiders - a quasi-boating shoe.  Bass and Sebago made them, and then there were knock-offs - the label didn't matter so much as the look: 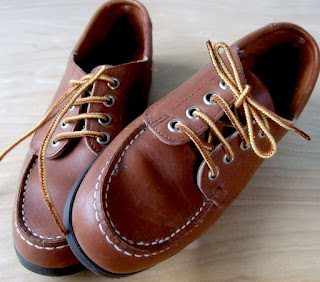 The cool kids left them untied with some kind of cool knot in the ends of the laces.  I wore a makeshift version of the aforementioned knot.

So, really - what hope did any of us have?  We all came out unscathed, though - that's the good news.  I will say, I ended up having some weird ass dreams about finding a place to sit in the cafeteria, and being unable to locate a report in my bookbag, so maybe I should take a breather before I plunge boldly into season two.

I have to say, I think animated series made for adults are fun.  I was an ardent fan of Dr. Katz back in the day  -  the day before H. Jon Benjamin was required to be in everything.  I like the Venture Brothers and some of the funny characters like Dr. Girlfriend.  I enjoy South Park, Family Guy, and of course Squidbillies.

I think a lot of that comes from having grown up in Georgia.  The story takes place in a fake county in North Georgia, but a lot of details are real.  For example, reporter Doug Richards is an actual reporter in Atlanta.  Stone Mountain exists.  Ellis Jay from Ellijay is a play on Awesome Bill from Dawsonville.  Is it childish?  Absolutely.  Is it funny? Also absolutely.

I don't know, I'm feeling a little off today.  I won't torture you further with my creative block.

Harry Hamid said…
I haven't seen the series although I did read an article on a conservative website that was horrified about it.

I grew up in the mid-to-late eighties, too. Itw as a horrifying time for which I wish there were no pictures. I'm not sure that there was ever a time when the styles were so horrendous.
January 22, 2019 at 2:01 PM

Christopher said…
The '80's were indeed a hideous time for fashion. I blame the prevalence of cocaine. Not that I ever had any, or intend to even if the opportunity comes up. I just think most fashion designers were out of their gourds.
When it came to footwear, though, at least the '80's had Kangaroo Shoes, which used Velcro instead of laces. That was preferable because I never could keep laces tied. Still can't.
January 25, 2019 at 11:59 AM