Variations on a Theme

on December 14, 2018
I love television theme songs.  In the current era, they don't exactly exist.  Family Guy might be the closest thing.  I once heard Seth MacFarlane on, I think, Fresh Air talking about his theme song, and what an iconic thing they were in his upbringing.

I once made the observation that more people could sing the theme song to Gilligan's Island than could sing the National Anthem.  I think that's more a flaw in the Anthem than anything, but still.

All of this to say, I have added some songs to my Amazon Music Library from the golden age of television.

And in television news, Mrs. Maisel's second season came out earlier this month.  I have ripped through it like a tornado in a trailer park.  It is such eye candy, ear candy and mind candy.  It's smart, but funny.  It pivots from light to dark on a dime, and honestly, I would watch Tony Shaloub eat cereal.  Or, to go back to his stint on wings, a BIG SANDWICH. 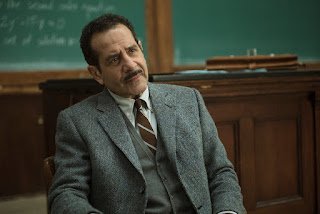 My father loved that show.  He referenced the sandwich from time to time.  Dad was a huge fan of Northern Exposure, too.  Is it any wonder I studied television in college?

Anyway, back to Mrs. Maisel.  If you like pretty clothes, and leisure, and comedy, and pathos, and tomato juice, and quirky characters, and articulate dialogue... well, this is a show for you.  The second episode features a scene with Rose (Midge's mother) getting into a cab that will break your heart.

Not sure what's next, in terms of watching.  We have one television set, it's typically in use for either a hockey game or video games.  I keep thinking I need to clean out the attic and set up a Lady Lounge - like a She Shed or Man Cave, but smaller.  I think I could manage. Maybe that's my post Christmas project.

Although, there are so many projects.

Christopher said…
The description of "Mrs. Maisel" that I read about the time it first premiered was enough to make me think about getting Amazon Prime. Still thinking about it but also hoping for a Blu-Ray version 'cause I'm kind of old school.
And this really takes me back to the '80's when a friend of mine had a couple of books of all the words to TV theme songs--including some that were purely instrumental. "The Alfred Hitchcock Show" put words to Gounod's "Funeral March Of A Marionette". I can't remember what they were but it was probably better they never got used. Same with the words to the "Star Trek" theme.
And also this:
https://www.youtube.com/watch?v=RFi8aZm3jnQ
December 17, 2018 at 9:19 AM