on December 12, 2018
In the spring of 1993, I was about to graduate high school, I knew I was headed to University of Georgia, and I was tooling around this great little thrift shop in my hometown called Peachtree Salvage.  It was the best.  Now, it has been torn down and they built a condo complex, I believe.  They paved paradise, indeed.

Anyway, that day, I happened upon a pair of shoes that appeared to have never been worn.  There was a small scuff on the toe of one of them, but they were my size, and I had to have them.

They are the first pair of Converse I ever owned, but far from the last.

I wear them rarely.  The only thing that needs some attention is the shoelaces - time to put in a cleaner pair.  But I love my red Chucks.  Love them.  I just don't wear them often because even when you wear a 7.5, your feet look enormous in them. 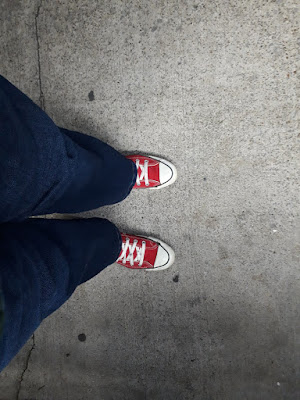 Although, truth be told, the only petite part of me is my feet.

Anyway, I wore them yesterday for the first time in, possibly five years, maybe more.  They went well with my ensemble.  It was  the office Christmas luncheon, and the theme was ugly sweater.  Mine isn't so terribly ugly, but it is definitely Christmassy.

That is obviously not me in the sweater, but it is indeed the sweater.  I bought it because I liked the color, pattern and sentiment.  Plus - 100% COTTON!  BOOM.  I will actually wear it more than once, and that is no small thing.

And my sweater was just the tip of the iceberg, so to speak.  The two best sweaters were: 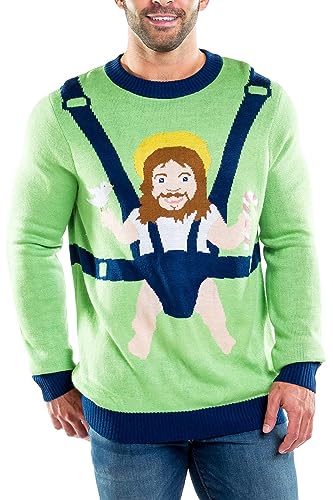 The former was worn by our CEO, and the latter by our CFO.  I laughed so hard I cried.

I told my Mother about these and she said, "Oh!  You have found your people."  And I have.

But back to the shoes for a minute.

Given that I bought them in 1993, they are 25 years old.  They are older than our interns.  And several of the women working in the Member Associates department.

I remember wearing then in college and my boyfriend at the time played Elvis Costello's Angels Wanna Wear My Red Shoes for me.  Which, as Elvis Costello songs and I go, was refreshing.  Anyone want to guess which of his songs people most often reference with me?

Hint:  My party dress gets taken off in the song.

Sesame Street did a parody of Angels with Mr. Costello himself.  It cracks me up:

So, I would normally insert the video, but I am having issues.  But watch it.  If for no other reason, harmony with Elmo. I won't wait so long to wear the red shoes again.