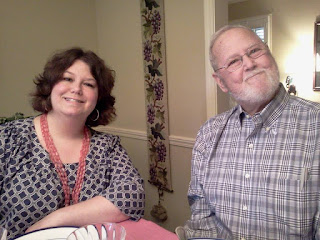 But since it is his birthday, I'm going to tell you 78 things about Dad.

3.  He was born caesarian, and it was a planned delivery so that his mother could enjoy Christmas dinner.

5.  She once threw a hot baked potato in his crib because she didn't like him.

10.  Dad was named after his uncle, William Rich Breyer.

11.  When his uncle died, he left Dad stocks, some money, and some monogrammed glasses.

12. Dad had to re-do second grade because he had measles and that kept him out for awhile.

13.  When he was sick with measles, his grandfather, Daddy Peirce, gave him an orange tabby who he named Tom.

14.  When he was in grade school, Dad's cocker spaniel, Silky, would follow him to school and wait for him.

15.  Dad was asked to leave Westminster School because he wasn't a great student.  His parents sent him to Baylor Military School in Chattanooga.

16.  While there, he started going to Sunday services at the Catholic Church because they let out quickly and he could go eat pancakes at the Read House Hotel.

17.  One Christmas, his parents took his sister to Europe.  He came home from Baylor with the instruction to charge anything he needed from the store.  He filled up an entire footlocker with canned goods, cookies and crackers, to the tune of several hundred dollars.

18.  He injured his knee playing ball at Baylor.  The school doctor gave him Paregoric and did nothing more.  His parents came up, put him in the back of their station wagon with a bottle of whiskey, and drove him to the doctor in Atlanta.  He had severed his tendon, and it had rolled up into his knee joint.  They operated and he detoxed off of Paregoric.

19.  Dad wanted to be a Forest Ranger.  His father vetoed that and sent him to Georgia Tech, which he hated.  He failed out just short of a degree.

20.  In his fifties, Dad was diagnosed with a learning disability.  He had been given some testing because he felt he was having memory issues.  Those were attributed to stress.  The learning disability explained a lot of his difficulties in school.

21.  Dad didn't learn to read until he was in his late teens.  His Uncle Bill (see above) gave him some PG Wodehouse books while they were traveling to Europe together.

22.  Dad was a male model.  A friend needed someone to be the "stout size" for a uniform company ad.

23.  One summer, Dad worked digging swimming pools.  He helped dig the pools for the polar bears at the Atlanta Zoo.

24.  Once, Dad found a rattlesnake in the mountains.  He put it in a pot with a lid and drove it to the Atlanta Zoo.

26.  Once, Dad had a green sports car.  He got hit by a woman driving a station wagon who skidded on some ice.  He cut his face.  His mother claimed it cut his "whistling muscle".  Dad would dispute this by attempting to whistle but making fart noises.  He could whistle.

27.  When Mom turned 40, he had me and my sister pick daffodils from a flower bed in front of a neighborhood because he couldn't find any at a florist for her party.  Her invitation and paper goods all had daffodils on them.

28.  He scouted mistletoe every Christmas.  His favorite tree was behind our bank, and he crafted a pole for gathering mistletoe.

29.  One year at Christmas, Dad and I cut greenery from a holly tree in the center median of Georgia 120 under the cover of darkness.

30.  Dad's petty theft extended to his mother - he would steal bones from a basket of her dogs' toys.

31. Dad had periods of estrangement from his mother and sister.

32. Dad hated therapy, but did it for years.

33. Dad made great cakes.  For my birthday, I usually requested chocolate pound cake.

34.  And my birthday meal was his spaghetti.

36.  He taught me to make my grocery list by the layout of the store.

43.  He lived six months in Copenhagen in his 20s.  It is widely believed that he introduced The Twist to Denmark.

44.  He lived for about six months with his grandfather (Daddy Peirce) at his cabin in Habersham County.  Dad would recall that as the happiest period of his youth.

45.  Dad showed me how to make the Land O' Lakes butter box into a joke.  The Indian Maiden's knees became boobs.

46.  Dad met Joan Baez.  He had a massive crush on her, and purchased a new sport coat for her concert.  He met her afterward.  When he reached out to shake his had, he noticed he had not removed the price tag from his new coat.

47.  Once, Dad was interviewing for a graduate program at Georgia State.  His mouth was so dry, his lip got stuck on his teeth.  It ripped off and he bled profusely.  He did not get into the program.

49.  When we were little, my parents had a pair of rabbits - one's name was BF Pimiento.  The BF stood for Butt F*** and Pimiento was a reference to the rabbit's genitalia.  Dad named him.

50.  Dad had a friend who had a farm up in Crossville, TN.  A commune of sorts.  His friend was married to a Hutterite named Susie.  Her sister had a crush on Dad - he called her his Hutterite Honey.

51.  Dad used all this money he had saved up for a boat to take my mother to nice restaurants when they were dating.

52.  My father's last coherent words to me were, "I sure do love your mother".

53.  If he was frustrated with your behavior, Dad would threaten to "jerk a knot in you".

54.  Once, Dad came by Harry's where I was working, and asked if we had any pppp-ppp-pp-p-p-petunias in the garden center?  I was mortified, and nobody knew he was my father, so I couldn't laugh.  Then he asked about p-p-pppp-p-ppppppp-p-pansies.

55.  For my 5th birthday, I asked to go to a Georgia Tech game with Dad so I could spend time with him doing something he liked.

56.  When I got into UGA, Dad bought me a tree ornament.  It mysteriously got broken.

57.  Dad was banned from the city of Athens in his 20s after breaking off a chunk of privet hedge from the sidelines after a football game.  The judge also fined him.

58.  As a result of the above, Dad would wear sunglasses any time he had to come get me at school.

60.  Dadspeak:  Breakfast of Champions = Snack Cake and a Coke

61.  Dad once told a Rastafarian that he no longer smoked pot because "Jah told me to put it down".

62.  Dad once called me a "Consummate Bullshit Artist".

63.  Once, we went to a concert where we had seats in the second to last row.  He turned to the folks behind him and said, "Last row, huh?  Sucks to be you."

64. Dad's father and grandfather both died at age 63.  For Dad's 64th birthday, we celebrated with a party, and put a shit ton of plastic flamingos in the yard.

65. His co-workers at REI called Dad "the main event".

69.  I once woke Dad up to come see an Ivory Billed Woodpecker in our yard. It was a Pileated Woodpecker.  He gave me a bird book.

73.  Dad had bad dreams about losing his retainer as a grown-up.

74.  Despite having shitty parents, Dad was an amazing father.

75.  His childhood nickname was Catfish.

76.  His grandchild has his first name as a middle name.

77.  Dad understood that I didn't want to have kids because I wanted to be a kid.