Open Letter to the Sherman-Palladinos and Amazon In Re: Spinoffs of The Marvelous Mrs. Maisel

So, mazel tov on your recent success with the show – all those Emmys, the second season is getting lots of great press, and everyone agrees that Mrs. Maisel is, in fact, marvelous.  With that in mind, this is the perfect time to capture lightning in a bottle.  That’s right, I’m talking spinoffs!  Here are a few suggestions for you to mull over.

You Do The Math – Let’s face it – most people would watch Tony Shalhoub read the phone book.  So why not put together a series of educational math videos with Professor Weissman shepherding your kids through the intricacies of fractions or AP Calc?  If we want to put him in the romper, there could be some calisthenics. This is a slam dunk.

The Moskowitz Files – For a Mrs., Mrs. Moskowitz sure spends a lot of time with her mother and sister.  In this thriller, Mrs. Moskowitz is a secretary by day, but spends her nights taking on private investigations.  But her biggest case is the one she’s afraid to crack… The Search for the Missing Mr. Moskowitz.

Zelda! – We know that Zelda gets days off.  What does she do with them?  This series answers that question and hilarity ensues.  Zelda is the mid-century heroine we all need.  She cleans up messes, whips up a gorgeous goulash, and looks good doing it.

Rose in Bloom – Did you ugly cry when Rose handed her beloved dachshund Simone to the landlady and got in the cab to leave Paris?  Sure, we all did!  So let’s get Rose back where she belongs.  It writes itself!  And it appeals to lovers of dogs, Paris, and anyone who has ever wanted to walk out of their current life and into a newer, better, Frencher one.

E-nalysis – It’s 1990, and thirtysomething Ethan Maisel is in crisis and in therapy.  Explore the effects of an unstable childhood as Ethan and his analyst peel back the layers of the onion that is his life.   When he’s not on the couch, he and his sister Esther are trying to save their family’s crumbling garment empire.  This one has some serious flashback potential!

Life with the Clearys – What makes the Clearys so different from any other adorable TV family from the sixties?  What if I told you they were sent here from another universe to try to find out what makes Earthlings tick?  It’s part domestic comedy, part science fiction, and all television gold.  Is that Imogene’s meatloaf I smell?  Or is it sizzling hot ratings?

Ad Astrid Per Aspera – This is the story of Astrid Weissman.  What’s a nice shiksa like you doing with a meshugge family like this?  Ths show discovers Astrid’s origin story.  We explore her strained relationship with her own family, her struggling relationship with the Weissmans, and her relentless optimism in handling it all.  It’s a classic fish-out-of-water story with a cheerful, sympathetic heroine.  Let’s be honest – it’s a shame to waste Justine Lupe’s shayne punim, nu? 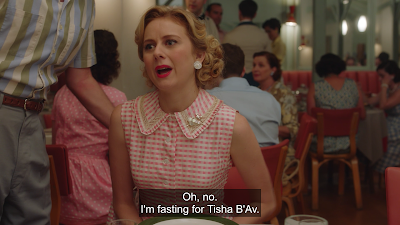 And I’m just scratching the surface here.  We haven’t even touched the Steiner Mountain Resort, The Basement Girls of B. Altman, or Luigi, the kid who puts on “TV shows” for his family in the window of Susie’s apartment.
One very important caveat and it’s a deal breaker.  There cannot be a Sophie Lennon spin-off.  Nobody wants that.  Even Jane Lynch would agree.  Put that on your plate!  But call me!