on September 09, 2018
This has been a fairly lazy weekend.  I've managed laundry, groceries and the like.  I took the beast to a DIY wash place where we met Fred the basset hound and his owner, whose name I didn't catch. He was in his seventies, and I think just needed to get out and see people.  They all seemed to know him.  That makes me feel a little sad, but ultimately happy that Fred has a good owner.  Piper let the man pet her, no questions asked.  I wonder about my dog.

Her collar was starting to get worn and smelly, so this week, I ordered her a new one.  It's pink with black, green and white bias plaid.  She looks sharp in it.  She smells way better, too.  Bless her little heart.  She left about a pound of hair in the tub at the wash place. 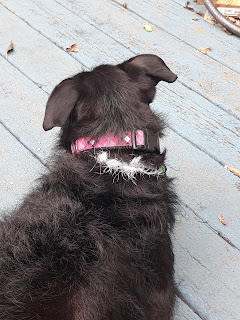 But beyond those tasks, it has been a quiet weekend, plenty of rest, and this morning, Piper and I slept way, way in.  It was raining out, cool and dark.  Piper is a good little nap pal.

The rain abated, and I went to Kroger.  By the time I was finished it had begun to pour.  So I loaded up as quickly as I could, and headed home in time to hear the Number One song on the Casey Kasem countdown they play on the weekends on one of my radio stations.  It was from this week in 1970, and the top two were Ain't No Mountain High Enough and War (What Is It Good For?). As I was driving, I heard the song Rubber Ducky - from Sesame Street - it was in the top 20.  Mind blown. Of course, I know all three songs like the back of my hand... Even though I wouldn't be alive for another three years, six weeks...or so.

I have everything put away, I've dried off a little and even managed to grill a little lunch in between the raindrops.

The mosquitoes are using the last weeks of summer to get revenge on their dead brethren.  I have so many nasty bites on my legs, and one on a toe that itches, but I can't see it. Bastard bugs.  Give me a spider any day.

Also, give me some bats to eat the mosquitoes.  I'm not squeamish.


Now, I don't often share videos, but a friend on Facebook posted this, and it made me weep with laughter.  It's clever, but the sweet grandmother reading a story to her grandbaby is Scottish, and her accent and humor is everything.  Give it a listen.