on August 14, 2018
When I was eleven-ish, I spent a fair amount at the home of a girl in my neighborhood - we'll call her J.  This is the same girl who wrote me the note containing the lyrics to "Just the Way You Are" in 6th grade.

J's family had a computer, and we'd often kill time playing Where in the World is Carmen Sandiego?  It was a fun game, and computers back then were a rarity.  So, I felt very cosmopolitan getting the opportunity.

The other game she had, that I recall, was called House-on-a-Disk.  It was a fairly simple premise.  You booted up the came, and a house appeared (open on one side like a dollhouse), and a little man moved in.  You could make his phone ring, send him a pizza, write him letters.  And otherwise just watch him live his life. 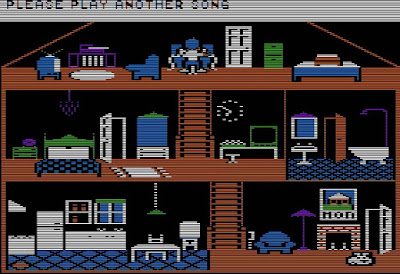 I was enchanted by the game.  I was a fairly lonely kid in some respects.  I was definitely a weird kid, and so I had thoughts and feelings that were non-standard.  I'm not saying I was wise beyond my years, but I felt things a lot more deeply than I let on.  Your standard "sad clown".   And while I had friends, in a lot of ways, like girls that age will be, they were frenemies.  We were friendly, but we would score points off one another and there were plenty of microaggressions floating around. Plus, there was plenty of bad juju coming from the people who weren't my friends.

So, anyway there was something about this little man that intrigued me.  You would write him letters, and he would respond with a limited set of ideas that were programmed in the game.  I always wondered if you stuck with him, stayed booted up and playing for awhile, would you get deeper into his thoughts and feelings.  I know now that computer games in the mid 80s weren't that sophisticated.  But I felt strongly that there was something more there.  J, and our other friends did not.  They were bored by it within a few minutes, and we would shut the computer down, little man in his little house and all.

As it happened, I was ahead of my time.  The Sims would come along in 2000, and they were closer to what I was imagining.  Before that, of course were Sim City, etc.

And of course now, games are smarter than I will ever be.

I just miss that little man.  I hope he's OK.

And I wonder if he misses me.

Turns out, even weird kids who grow up into quirky, but stable adults still get lonely sometimes.

Christopher said…
Loneliness seems to be something of a theme for you lately.
I'm sorry to be a little too old to have played Carmen Sandiego--my first computer had a monochrome monitor, but, more importantly, it had a modem that allowed me to call up local bulletin boards. It was a sort of proto-internet, and how I met my wife. And while the internet we have now is a great improvement I miss having weekly meet-ups with the weird and wonderful friends I talked to through the computer.
August 15, 2018 at 1:19 PM