on August 22, 2018
When Matt started watching old episodes of Breaking Bad in early 2013, I wasn't especially interested.  And then I sat and watched one from early season one with him, and that was it - I was hooked.

The characters were interesting, flawed, and complex.  The story was plot and character driven, and even though it was clearly a drama, much like life, some of the funniest moments were co-mingled with the darkest moments.

We caught up with the previous seasons just in time to start the final season, and it did not disappoint.  So when we heard that Saul Goodman, played by the inestimable treasure that is Bob Odenkirk, was getting his own spin-off - well, that seemed too Good(man) to be true.

And then we started watching.

Now, I loved Breaking Bad.  LOVED.  I thought it was brilliant, clever and tragic.

The first thing you have to understand is that I have been a Bob Odenkirk fan for no short period of time.  Matt and I inhaled his Mr. Show box set a number of times.  And Bob, while always being Bob, was everyman enough to disappear into characters. 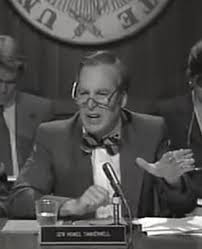 One of my favorites was Senator Tankerbell - a southern, dixiecrat, Colonel Sanders-esque gentleman who thought the "The Arts" were full of smut and pornography.

I urge you to watch the clip.  There is a payoff at the end of the whole episode where we see Senator Tankerbell leaving a hotel room where Mr. Limberlegs is still in bed.  Ever the gentleman, Tankerbell leaves some money on the dresser.

Bob Odenkirk is responsible for the Chris Farley character "Matt Foley, Motivational Speaker".  So every time you say, "In a van, down by the river!", thank Bob.

So, I knew and loved Bob, the comedian.  And his roll in Breaking Bad was heavy on comic relief.

And then came Saul.

Everyone has an origin story, or a series of origin stories.  Most of them are fairly vanilla.  I remember taking a "Journalism" class in High School, wherein we wrote the school paper. Given that our mascot was the Hornet, our paper was called The Sting.  Which I maintain was a kick-ass name for a school paper.  Anyway, we were under a deadline to put an issue out, and it was chaos.  I got permission from a few teachers to skip their class that day to make our deadline (and weirdly, they all said yes).  I remember thinking, "I could do this every day of my life and not get tired of it."  And that is when I decided to study journalism.  Getting my French minor was a series of lucky breaks that contribute to my origin story.  We all have events in our lives who make us who we are.

Saul's story is more interesting than most.  When we meet him, he's Jimmy McGill.  He works and lives in a nail salon.  He's a public defender living in the shadow of his older brother, Chuck, who will never fully approve of Jimmy, no matter what he makes of himself.

Chuck is played by Michael McKean - yeah, remember Lenny from Laverne and Shirley?  Remember Spinal Tap.  Yes, that Michael McKean.  Now, it would have been easy enough to make Chuck a complete evil bastard.  But that's too easy.  We learn that Chuck has a debilitating condition that keeps him completely housebound and dependent on Jimmy.  But even that would be too easy.  We learn that the condition clearly appears to be a mental illness - he is "allergic" to electricity.  The doctors don't believe that it's a thing, but McKean plays it so perfectly that you can't help but believe him.  Even though you know it's all in his head.

We learn more and more about their childhoods, their lives leading up to present day, and it unfolds like an intricate piece of lace.

Of course Mike Ehrmantrout is back, Gus Fring, Victor Salamanca - the whole gang.  But the character that I'm laser focused on at the moment is Kim Wexler.

She is Jimmy's girlfriend, confidante, advocate and family.  And we know, because we know it can't and won't end well.  She is amazing.  She is a self-made woman who is pushing herself every day to do better than the day before.  Jimmy is her biggest weakness, and we know it's going to bite her in the ass, and yet, we hope that it doesn't.

I guess what I'm saying is, watch this freaking show.

And go back and watch Mr. Show.

And then watch Nebraska, where Bob has about three minutes of screen time, but he makes the most of it.  Also, because it's the Will Forte we love, as opposed to the character he plays in Last Man on Earth, which... we love to hate.

Now, coming full circle, the first time I saw Will Forte was on Saturday Night Live, playing Senator Tim Calhoun.  I howled.  I howled a lot.

Something about funny guys playing politicians, I guess.

Christopher said…
Odenkirk's initial reluctance to play Saul because he thought the character was Jewish then being immediately hooked, as were we all, by the fact that it's a pseudonym, is one of my favorite entertainment industry stories.
The Nashville Public Library has a CD called "Amateur Hour" that includes Odenkirk doing a normal standup set. Except it's weird and brilliant, as you would expect.