on July 05, 2018
In Atlanta, on the 4th of July, there is a 10K footrace - The Peachtree Road Race. They close down Peachtree Street - a main artery that runs through the city. The current registration caps it at 60,000 runners, and they estimate another 150,000 line up to watch.   Also, it's hotter than living hell, and at the end, you get a t-shirt. 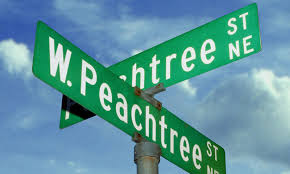 The year I spectated, Mom was walking the 10K with a friend - that's not uncommon by the way - as long as you can finish within a few hours of starting, they're fine with you walking.   I went with her to cheer her on.  I would have been in my teens - though I can't specifically remember how old.  Pre-college.  I ended up buying my breakfast at the Swissotel next to Lenox Mall.  I had a croissant and a glass bottle of Coke.  So cosmopolitan.  I watched Mom's group start the race, then wandered to MARTA to take a train to the finish line.  I met her there and we took the train back to her car.

The first time I did the Peachtree, I was in my 20s.  I had lost a bunch of weight, and I was feeling good.  I had been walking a lot, and I felt like I could handle it.  I walked.  I am not a runner, and that's fine.  But I walked it and crossed the finish line like I had completed a marathon.  I went to meet Mom, who was working at the medical tent at the finish.  She had to stick around and suggested I wait with her, but I was feeling hot and tired, and wanted to go home.  So I walked back to MARTA.  Or, at least I thought that's what I was doing.  I got turned around and ended up walking an additional six miles, in the midday July heat til I found my way to a train station.  The bottoms of my feet were all blister, and I had rubbed my skin raw in a few places.  When I got to the parking lot with my car, I was so disoriented and dehydrated, I could not find my car - a MARTA security office found it for me.

Surprisingly, I decided to do it again the next year.  Uneventful.  I met Mom at the medical tent, stayed with her til it was time to leave, and we walked back to MARTA together.  I got off at the Perimeter station, and went sweaty and smelling like death into Rich's to pick up my paycheck.

My final Peachtree was with Matt.  I told him he needed to do some prep or he would struggle. I was worried he wouldn't be able to manage.  Well, I forgot that he was used to being on the move with pounds and pounds of camera equipment in the southern heat, so this was just a version of that, with less gear.  He took off and I didn't see him for a few miles.  I reasoned that I had the keys to the car, so he could just go on without me, he couldn't get home without me, though.

He waited for me a few miles in, and we finished the race together.  We went home and laid in my apartment, lights off, air conditioner on high, watching episodes of Reno 911.  Eventually, we made our way out to dinner, with the intention of catching fireworks that night.  We couldn't find anywhere to park for the show, so we went and sat in a little park near my apartment.  I did interpretive dance for Matt representing different kinds of fireworks, and we ended up catching some from where we were sitting.

This year, the winner of the race crossed the finish line before I even woke up.  Mom hasn't worked the medical tent in years.  I don't think I have any of my t-shirts from my three years.  I haven't had the interest in doing it in ages.  That was then...this is now.

But I loved it.  I'm glad I did it, because it's an iconic thing to do.

I remember when I was interning, my boss came in after the 4th and said, "I ran the race, came home, threw up, took a shower and had a nap."  That sounds about right.

Now, I might still go have a croissant and watch the crowds go by, but even that seems like a stretch.

Instead, I made a corn salad, went to Aldi, made lunch for my man, napped and went to a cookout this evening.

However you celebrated, or even if you didn't - I wish you life, liberty and the pursuit of happiness.