When I was my early teens, I read The Catcher in the Rye.  Actually, I think I read it for the first time when I was ten, just because it was purported to be so sweary.  I read about how it got banned and had so many curse words in The Book of Lists.  So of course, I read it at age ten.  I didn't understand it.

I didn't understand it for a great many years, as it happens.  I didn't realize, for example, that the narrative of the story is something that Holden is telling a therapist (at least that's one theory).  Here's the first line of the book:

"If you really want to hear about it, the first thing you'll probably want to know is where I was born, and what my lousy childhood was like, and how my parents were occupied and all before they had me, and all that David Copperfield kind of crap, but I don't feel like going into it, if you want to know the truth."


I always assumed that the "you" he was talking to was me.  When I sussed out that he was under medical care, I then assumed he'd gotten sick from riding the carousel in Central Park in the rain.  Pneumonia or something.

No, as it turns out, he's likely in a "facility", getting help.

I was 17 when I uncovered all of this.  I had spent years wondering why I couldn't meet a "nice guy like Holden Caulfield".  It was not the first time I mistook mental illness for profundity.  It would not be the last.

I found it out in my 11th Grade AP English class - the first week of school.  I felt so disillusioned.  Holden wasn't so much deep as he was deeply disturbed.

I never really saw symbolism in literature very easily.  Thankfully, Cliff's Notes were there for me.  I remember in High School, after my 11th Grade AP Exam, several people talking about a poem that we were supposed to dissect, and how this little girl pretending that a low branch on a tree in her yard was a horse was a metaphor for sex.  Really?  REALLY!?!   Apparently, they were right.    That same year, the AP US History Exam had an essay question  about westward expansion.  The magic phrase was "Manifest Destiny" - which as soon as I got out of the exam, came to me - and in the 26 years since, is a phrase I beat myself up with at least weekly.  Go West, Young Man! 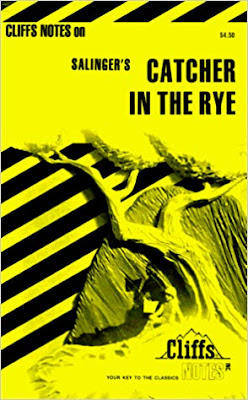 The thing is - I know I'm reasonably intelligent.  And it a lot of ways, I am extremely empathetic and intuitive - but that's with people and feelings.  I don't get what's so significant about the Christ Imagery in Grapes of Wrath.

Truth be told, I need to re-read the Grapes of Wrath.  I slogged through it with the help of Cliff's Notes back in High School - but I didn't enjoy it, and I didn't get anything out of it.

Here's the one thing I can remember.  The family is at a WPA Camp, and the women are meeting.  One of them complains that someone is using too much toilet paper.  Another woman pipes up that it's her kids, who have the "howling skitters".  Yeah, leave it to me to find the poo-poo humor in an American Classic.

For what it's worth, Howling Skitters would be an amazing band name.

BTW - I found a new stationery line, courtesy of a friend of my colleague.  Get thee to https://www.mincingmockingbird.com   - STAT!

My literary analytical insufficiency bleeds over into real life, sometimes.

When I first started at my job in this building, one of my colleagues at a former company was working one floor down.  He was had been our CTO, had been a new company's CTO and interim CEO.  I really liked him - we had kept in touch, and I genuinely respected him and his work.  But he was leaving this company to go work for a venture capital firm.   His last day, we happened to ride the elevator down together, and he opened the door to the parking lot.  I thanked him and he said he wished he could have opened more doors for me.

I puzzled over this for a while.  Did he mean it in the sense that he enjoyed my company and would miss seeing me?  Did he mean professionally - offering me opportunities?  Or was he so clever that he meant both.  It's a nice compliment, regardless of intent.   I asked my personal social cues translator, Jim, what he thought - he said both, probably.

Jim does a lot of translating for me.  I told him recently, "Look, I don't understand subtlety - you have to spell it out for me."  And I guess that's pretty true.

I've had a handful of nuanced conversations recently that make me wonder what the other person/people are thinking.   It's not that I'm not paying attention - it's just that I'm lacking in context.

I should probably just ask.  But there are so few surprises left in this world - I could just embrace the ambiguity.  Also - it's not anything that won't unravel itself by letting time pass.