I saw Incredibles 2 the other night, and I highly recommend it.  It had, to me anyway, a strong feminist bent to it.  I was especially enamored of a female super hero named Voyd, who shot portals into the air.  There's a scene where she fangirls over Elastigirl that is quite endearing.

The short that ran before the feature, Bao, is a quirky little tale about a mother who is reluctant to let her son grow up.  The characters reminded me of several of the Asian families I worked with at Harry's.

I need to get back to the movies more often.  If for no other reason than to eat raisinettes.

I had my annual physical this morning.  I pre-empted any weight talk by starting the dialogue and controlling it.  My NP suggested the Keto diet.  We'll see.  I like bread and pasta and potatoes... but I also like meat, bacon and cheese.  The problem is I like everything and in big portions.

I thought it was cute that the nursing student who did my vitals and history called me ma'am.  I don't feel like a ma'am.  I feel like the peer of the student nurse - and I am not.

I recently got myself a new phone.  During the great vertigo disaster of November 2017, I managed to put a few cracks in the glass. To get it fixed would have cost more than a new phone.  My advice to phone buyers - get an unlocked phone on Amazon and save some $$$.  Especially if you're not crazy specific about what you want.

The upshot of that is, the game Two Dots lost my progress and bumped me back to level 1.  I had reached over 200.  So, I uninstalled it.  I don't have time for that nonsense.

But I still need a mindless game to play for when I'm in a waiting room, or a long line, or just need something on the screen as a distraction. 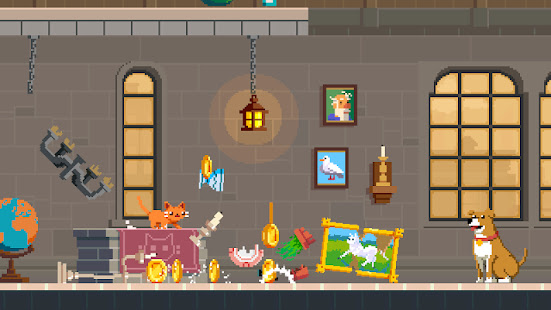 It's not fancy, it's very basic, the artwork is hilariously rudimentary, but it's a great game.  Basically, you're one of a handful of cats who run the floor and try to cause as much damage as possible.  You can jump, but that's about it.

I enjoy it, and I am at best, mediocre.  But eventually you win other cats, and hats for them to wear.  It's fun.  Even when they die, they do a comic, over exaggerated death spin.  It has some appeal, and eventually, I may go back to more logic based stuff, but for now, this fits my life.

I'm really enjoying the shorter hair this summer.  We were talking about hair the other day, and my friend Jim voiced a preference for when I do the keratin smoothing treatment (ie; straight).  To be clear, I decided to end those after people reported issues with the harsh chemicals, and I made a major dye job mistake...a few years back - I don't remember exactly.  But it wasn't good. So, Jim be damned, I'm sticking with my curls.    I didn't even wear it straight for my wedding.  Why fight the heat and humidity in August, I ask you?

I put together some really pretty flowers from Trader Joe's.  I paid $10, but it looks richer than that.  The key is a really full bouquet. Lots of textures.  I would have liked to be a florist, I think.

So, as I told the receptionist at the doctor's office, "Here I am rock me like a hurricane".