on June 27, 2018
This afternoon, I texted three people - my husband and two best friends.  All three got the same message:


I thought it was pretty funny.  So did they.  It's not the kind of thing I can post on Facebook, though.  So here you are, my select audience.

I desperately need a haircut.  I told my friend Jim today I look like the cross between a Weeble Wobble and a Troll doll.  Not one of the cute ones from the recent kids movie.  Old school. 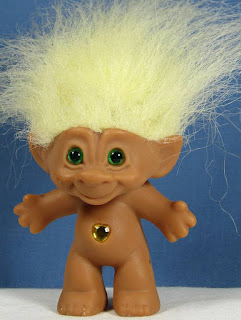 Fun story.  When I was in college, they designed a t-shirt for one of my sorority parties.  Navy, long sleeved.  On the front, in red, our name, the date and the event name.  On the back, framed by a border of Weeble Wobbles, read:  We Will Wobble But We Won't Fall Down.  It was, bar none, the best shirt of my four years at UGA.  I had it for ages.  I think I finally let it go after it was more holes than shirt.

Anyway, back to the point at hand - I'm a little frustrated with my hair, and I have no way of getting to Atlanta for a cut any time soon.  I should find someone local.  I know, I know.  I just really think my guy in Atlanta gets me, gets my hair.  And I have hard hair.  I am well aware that I am a nightmare client.   Which makes the whole thing that much harder.

I'm also frustrated with my diet.  I realized I have to go back to my doctor next month, and they are not going to be pleased with the tale of the scale.  I have to decide what I'm going to do with that.   I read a post on FB the other day from an acquaintance who lost 100 pounds from gastric sleeve surgery.  The two people I know who did that surgery look thin.  But neither looks happy.  In their eyes you can see this sort of pained desperation that reads, "Now am I good enough?"

And I get it - this is about my health, not a beauty thing.  But let's be honest - nobody can look at you and see your soft pink liver, and your clear arteries and your blood flowing at the exact right rate.  They can look at you and see belly, and thighs and arm ham.  And from that they can draw conclusions about who you are, and what you're worth.  And once they've looked at you, they can look through you.  Oh yeah, y'all - we're getting deep tonight.

So, I've got that to fret over.  I'm channeling that fret into hair, and hoping that my changes in diet will make some small difference before next month's appointment.

I have a call to the city tomorrow  - they put a notice on our door, and we're the wrong recipient.  More on that after I straighten them out.  But it's going to nag at me tonight and until I get it taken care of tomorrow.

I'm supposed to go to a UGA Journalism School Alumni networking event tomorrow - it's in a very inconvenient location and at a very inconvenient time - so of course, I'm totally looking forward to it.  But, I get the importance of making contacts, learning who lives in my town and so on, and whatnot.  If I feel as tired tomorrow as I did today, I may politely bow out.

I'm a little stiff in my left shoulder, and for some reason, my nose has itched all day.  Whether it's something blooming, or the woman whose fragrance overpowered me in the elevator at work, I know not.  I will probably take something before bed - in the benadryl or chlor-trimeton family.   I might also take something for the shoulder.  Meh.  Getting old is amazeballs.

I'm also a little worried about the state of the union...namely, the whole Supreme Court justice thing.  As a middle-aged, middle-class, straight white woman, I don't have a ton invested in some of the landmark decisions that could be overturned.  I'm too old and too IUDed for Roe v. Wade to affect me - though I want to joke about getting an abortion while I still can.

Obergefell doesn't affect specifically, but my friends who married a person of the same sex would be affected, and that sucks.  Two of the best mothers I know are a married couple with a little girl they are raising to be a fierce and fearless person.

Those are, from my POV, two of the big ones.  So yeah.  The thing is, what if Ruth Bader Ginsburg dies in the next two years?  Or Stephen Breyer, Sonia Sotomayor, or (to a lesser extent) Elena Kagan?

Then we have to hope that checks and balances do their job.

Of course, we always have to hope for that.

And so much else.

We will wobble, y'all.  But we won't fall down.

Christopher said…
Reading Lindy West's Shrill I learned that even though she's a large woman she is by most measures--heart rate, blood pressure, cholesterol--quite healthy. Being thin apparently is not the only way to go.
Also as a white cis male in a job with health insurance I know I don't have a lot to lose, and yet...I have family members who are in same-sex marriages and friends who are transgender and people of color. What affects them affects me, even if indirectly, so I just hope I can use all the advantages I've got to their benefit.
June 28, 2018 at 10:05 AM