on June 06, 2018
First, I'd like to address a comment on my last post.  Chris, I do not know what kind of parent names their child Elizabeth Lilith.  The fact that she had a slight lisp made it all the more egregious - but her parents couldn't have known that was going to happen.  Oh well.  I actually like the name Lilith, but I don't know that I'd give it to a kid.  Maybe a calico cat.

I also want to agree that the impeccable execution of so many different types of humor on both Cheers and Frasier was insane. The physical humor in particular always impressed me because I have no talent for it.  There was a bit on an episode of Frasier, and I'm working from memory here, so it may be spotty - but there was a bit where Niles was ironing a pair of pants and ended up setting a small fire.  If you have seen the show, you know what I'm talking about.  If not, get thee to YouTube and laugh.

So, yeah - I loved those shows, and of course, I loved Bebe Neuwirth.  I would have been in my tweens when she joined Cheers.  There was something about her that appealed to me - she was acerbic, severe, smart and great fun to watch - and of course, she earned her stripes on Broadway, and the woman can dance.  She is completely comfortable in her skin.  Forget Diane and Rebecca.  Lilith and Carla were the women at the bar who I found most interesting.

I feel like the weekend totally got away from me, as weekends do.  The good news is that I have some free time during the evenings this week to do a few things.   Mostly, I need to wrangle dog hair, and I need to keep the dog comfortable.  As happens in this weather, she's itchy.  I've got her set with flea meds, she had a bath Saturday, and her Seresto collar arrived Monday - thanks Bayer and Amazon for better living through chemistry.

I got a quick massage Sunday in the name of dealing with some of the more invasive knots in my shoulders.  Good news:  she found them.  Bad news:  a few toxins from those knots are still free-floating through my veins.  I have tried to hydrate and flush them out all week, but truth be told, I need to do better.  I also went to a social event involving goats and cookie dough.  The less said there, the better. 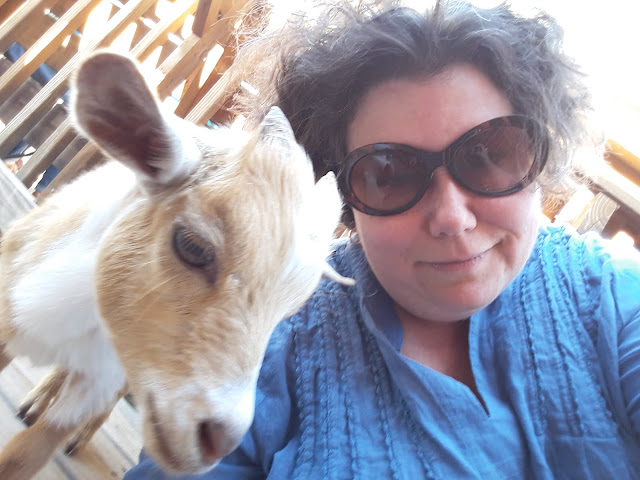 And now it's already Wednesday!  For crying out loud!  But, I've done a few useful things while Matt is on a work trip.  I put light bulbs in the hallway fixture.  It was grody taking down the glass dome.  Lots of insect carnage.  But now - let there be light!  Yeah, I said grody.  And that's what it was.  I don't think we've had to do anything with that one fixture for at least five years, maybe more.

Piper seems to have made a new friend, sort of.  The kid next door got a dog - a mostly white pit mix named (if I am hearing right) Toomba.  They have been checking each other out through the fence.  And last night he was out in the alley while they were loading some stuff into their truck, and Toomba kept trying to crawl into our yard under the fence. Cute little thing.  I think Piper could use another pal.

Tonight, I have tickets to see Waitress with Jim.  This is probably the last musical for awhile.  The new season at TPAC does next to nothing for me.  We'll see.  I may just have to go to Chicago for a Hamilton weekend.  One of my colleagues told me he got his wife tickets for $240 per.  That's not bad.  I probably have a one way seat on Southwest in points.  I could stay in any hotel I wanted for a few nights, thanks to Hilton points.

I should totally do that.  I do enjoy Chicago, and of course, I could take in some shows at Second City, et al.  I could do some serious shopping on Michigan Avenue.  I could finally go get a photo taken in front of the huge metal lima bean.  I could bring home some Lou Malnati's frozen pies in a Jewel-Osco freezer bag.

This is sounding better and better...

I need to plan a vacation.  Matt's cousin in Alaska was texting me the other night about coming for a visit.  And wouldn't that be a hoot?  Especially in Summer.  We need to go.

Then, my sister heads to San Francisco mid-Summer for their next assignment - so that's another destination courtesy of family and the United States Marine Corps.

But I want a trip that is purely selfish and of my own choosing that doesn't involve other agendas.  That's just how I roll.

I could use another haircut.  I'm starting to look a little unruly - that is the shame of shorter haircuts. With the heat and humidity, it's going to be kind of crazy anyway.  It may just need some TLC in the way of deep cleaning, and/or deep conditioning.  Or maybe it needs to be deeply ignored for a few days.