on May 12, 2018
I did my grocery shopping today, which is not my usual weekend routine.  But I had an $11 coupon that expired today, so you do what you do.

Truth be told, I would rather shop at Aldi.  It's simpler, it's quicker, and the woman who bags my groceries always, always kills it.  Oh, OK.  You bag your own at Aldi, so of COURSE it's exactly how you want it.

Kroger was not as mobbed at 4PM on a Saturday as they are pretty well any time on Sunday.  Though, given that tomorrow is Mother's Day, I might have had a chance.  The produce was a little jumbled, but not entirely picked over.  The meat department is where I had some issues.  I have gotten so lazy.  I like to buy the pre-made hamburger patties.  They are easy, they are perfect, and I get them fairly often.  Today, they were all out - which happens in the Summer.  I'm sure I could have asked at the meat counter, but instead, I bought ground beef un-pattied and behaved like a grown person.  But when I got to the empty space in the meat case, my brain just ground to a halt - you could hear it powering down - sort of a VOOOOOOooooooooom.

I rallied.  I did find something new at the store - a half package of hamburger buns.  This is, in no small way, a brilliant idea.  For those of us who don't have large groups to feed, we end up tossing a lot of things that have gone bad.  I can't use eight buns in the span of a week.  And yes, I could freeze them... but I have only so much space in the freezer, and bread is the least of my worries.  So, four buns it is! 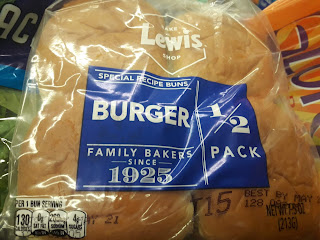 There were plenty of registers open, so I avoided the one with the bossy, mean cashier I can't stand.


As I believe I have mentioned, many times - I lay my purchases out on the conveyor belt in roughly the way I like them bagged.  So, there's some method to it.  Heaviest things, then dry goods, then meat, then produce, then bread and other delicate items.

The kid who bagged my groceries is a fixture of this store.  Though I am not a diagnostician, it's safe to say he's on the spectrum, somewhere.  He introduces topics of conversation that are out of nowhere, and you're just dropped into the middle of them.  Today was the run times of both the original Blade Runner and its sequel.  Surprisingly, this is a topic where I can keep up.  I have seen both.  I mentioned the director's cut, and from there, we devolved into deleted scenes and alternate endings.  I thought about mentioning that the Blade Runner car shot was footage used in The Shining as well, but why complicate things?

While he's a nice guy, and works hard, he bags haphazardly.  I realize in the grand scheme, it's not really that big of a deal.  My favorite bagger young woman.  She's good, but I rarely get her.

And that's that, in re: my shopping trip.  I saved my $11, and we have good food in the house.  All is right with the world.  Once again.


The remainder of the shopping went on as planned, no issues.

Christopher said…
Part of me thinks selling a half package of hamburger buns is a brilliant idea and part of me thinks, wait, if they're packaged like that then is it really a half package? Isn't it just a smaller package than the standard? And who set the standard in the first place? And has anyone noticed that the old joke about hot dogs being sold in packs of eight and hot dog buns being sold in packs of ten (see Steve Martin's grocery store meltdown in Father Of The Bride) is now obsolete?
These rabbit holes can leave me standing in the bread aisle for a very long time.
May 16, 2018 at 11:46 AM