on April 17, 2018
I have some random things to say, so this is going to be like a weird salad bar with iceberg lettuce,  corn, pickled beets, suspicious chocolate pudding and three kinds of croutons.  But where someone put the French dressing ladle in the Ranch dressing tub and there's this tainted swirl of mayonnaisey orangey goo therein.

I love Facebook posts that reveal a person's true nature.  I have an acquaintance who is forever espousing her religious beliefs, but today, when someone got into her snackybitz she'd stashed in the work fridge, she was decidedly uncharitable about it.

I have had my lunch nabbed from the work fridge before, and it sucked because I had to spend money I didn't have, and I had to leave the office when I hadn't planned on it and  - look, it sucked.  But even then, in my twenties, I had the presence of mind to realize that if someone stole my shitty pizza from the work fridge, they needed it far more than I.  And the thing my Dad always said is that food is cheap, so don't be chintzy about food.  And I never have been.  I buy too much, prepare too much, eat too much.

My point is - sorry your afternoon nosh got pillaged.  But if you're so tight with JC, ask him about his loaves and fishes.  And turning Mr. Pibb into Dr. Pepper.  Or something.

I got a manicure last night with my friend and former co-worker Michelle, who is in town for work.  She brought one of her colleagues with her.  I had to mind my p's and q's and not be a Rude Gus regarding my previous employer.

And let's be truthful - I have mostly good things to say.   But I'm not sorry I left, and I wouldn't go back.

One of my current colleagues was telling me that at his last place, people left and came back so often that they had a boomerang they'd put on folks' desks when that happened.  This is possibly one of the funniest things I have heard in awhile.

Harry Anderson died.  He was so good on Night Court.  His office had a taxidermied armadillo in it on that show, and I kind of wanted one.   Television in the 1980s is the reward my generation got for putting up with Fashion in the 1980s.  He was too damn young.   Sixty-five.

I had a dream Monday night of a lengthy, soap-operatic saga of families - feuds, inheritances, heirlooms and letters.  There was some dispute over the posession of an engraved fountain pen, and a second, less desired engraved pen.  There was some death.  There were home inspections.

And groceries.  I bought all kinds of groceries, and Christmas presents.

Clearly, I need to put more effort into defragging my brain while I'm awake. Tuesday night was way, way better.

And finally, homeless humor.  The Contributor is Nashville's own homeless run, written and distributed publication. It was a newspaper for years, and recently changed to a magazine. The thing that hasn't changed?  Hoboscopes. That's not a typo: 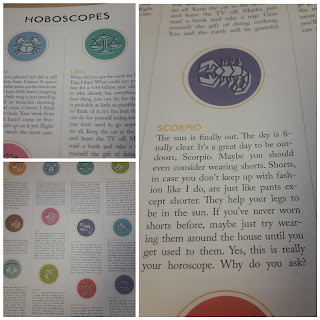 Mine is silly this issue, but some of them are crazy poignant.

Life is like that. A mix of silly and poignant.