on March 27, 2018
OK.  So, I was cooking dinner tonight, and in preparation, I had to remove stickers from three bell peppers.  One of them had THREE stickers on it.

The idea of stickering vegetables is kind of ridiculous.  It used to be that only bananas had a sticker - Dole, or Chiquita or... hell, I don't know Bananco.  And that was it.  And then, at some point, apples got them, and then from there, all hell broke loose.  Now you find them on bell peppers, and just about any fruit where they'll stick. 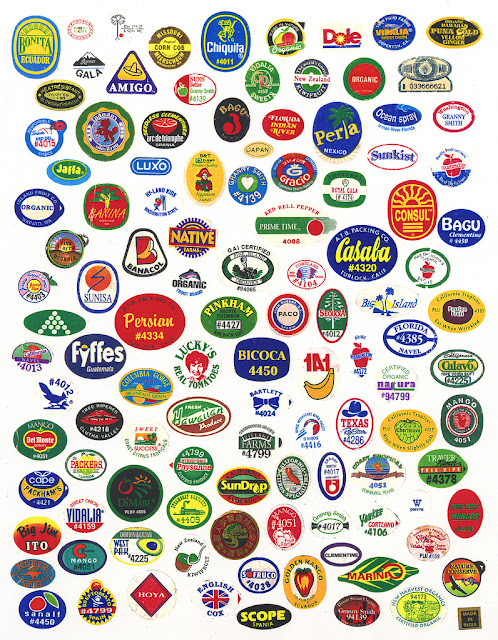 I know people are eating them.  I know this because my mother used to work in a gastro unit at the hospital, and they found them in colonoscopies.  No kidding.  Gross, but totally true.

And OK, there are items that benefit from the stickers.  Bananas?  No.  Fuck that.  If you can't identify a banana, get the hell out of the grocery store.  But some of the newer apples are similar looking, so if I can tell a Jazz from a Pink Lady with a sticker, great.

The stickers, honestly, are a crutch for the cashiers.  When I worked at Harry's, we had to learn the PLUs for each type of fruit and vegetable.  Now, they were not the universal codes of today, but there were easily hundreds of them.  So we had to identify things by sight, then remember the code.  This was not easy.  Now, you learn bananas first thing because everyone buys them, and as previously mentioned, a banana is a banana is a banana.  Sure, there are plaintains, and burro (baby) bananas, and red bananas, but your average family banana is 4011 (it was 57 at Harry's).  Yes, I know the code for bananas, because I use self check out all the damn time.

But when it got to the brown, vaguely furry root vegetables, malanga root, gobo root, and jicama all looked similar.  Kefir lime leaves and curry leaves are nearly identical.  Especially when those things come through your line once a week or once a month.  I was easily one of the shittiest cashiers at PLUs.  But, I knew how to tell ginger from turmeric, cilantro from parsley, and peaches from nectarines.  I could identify all the apples and the oranges.  I knew what most things *were*, even if I couldn't remember what their code was.  And I could look it up in my book quickly, or get an assist from one of the other cashiers.

Sunday, when I bought four bell peppers (red, yellow, orange and green), the guy had to scan the barcode on each one to ring it up.  I knew all four of those, plus the weird ones - brown and purple bell peppers.  I had them memorized.  So yeah, I'm going to get a little frustrated when you ask whether it's a cucumber or zucchini.  Or when you can't ring up a lemon without scanning the sticker.

Anyway, that's the rant I was preparing along with dinner.

Because I'm stuck on the stickers.

I went to Macy's at lunch to be disappointed. First of all, the clothes are fugly as all get out.  Second, Clinique was out of Intense Peridot eyeliner.  That's my liner of record.  I love it.  They also discontinued one of my favorite lipstick shades, so I am still working on finding a suitable replacement.  In keeping with the produce theme - the color was Crushed Grape (Rest in Peace).

I have been doing some proofreading this week, as well as some research and data entry.  It's different, and it's fun, and I am loving it.

A former colleague invited me to a lunch for a mutual friend who is celebrating a big work anniversary.  The celebrant in question is out of town on the date of the celebration, and I had to break it to the former colleague.  The fact that I have a better grasp on my former organization's staffing schedules is... sad?  Telling?  Hilarious?  All of those.

So, you know - I have causes, and lots of them.  Some of them are even worth fighting.

Christopher said…
Good luck finding some pocketless blouses. I assume the giant pockets are there because for some reason women's pants, slacks, and trousers can't be designed with pockets.
And thank you for the sticker shock. And your mother's experience reminds me of the joke about a guy who swallows a glass eye and his doctor, performing a colonoscopy, sees it and says, "What, don't you trust me?"
March 29, 2018 at 6:51 AM