on March 30, 2018
I have been in kind of a cranky mood the past few days.  Too much junk food, bad sleep, weird weather, and doing work that is important, but tedious and exhausting.

I made cakes two nights in a row.  First for Matt's office - theirs included Hot Wheels, since he works in a studio that shoots shows about cars.  Mine were just straight Rites of Spring cakes.  Easter, I guess you would say - although to be clear, the spring awakening version, not so much the Last Supper version.

I'm what you might call a pagan about these sorts of things. Regardless, it's coconut cakes, with dyed green "grass" icing.  I load them up with bunnies and chicks and jelly beans, and everyone is happy.  Well, in theory. 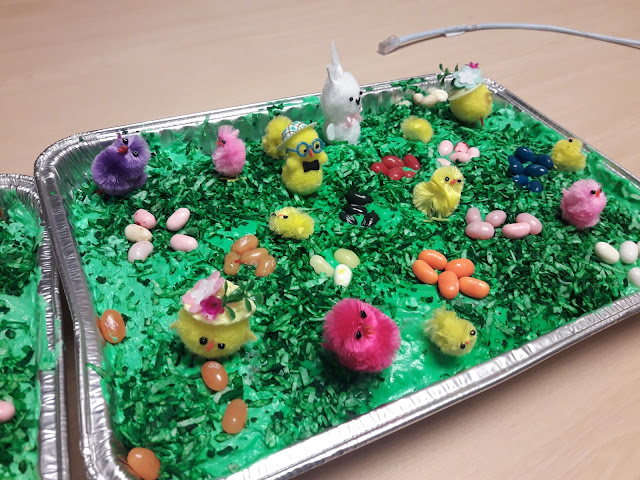 Matt's cakes went over gangbusters.  Mine are sitting untouched.  Part of the problem is our inherent lack of a breakroom, which means that they're kind of sitting in a cubicle without much curb appeal.  I may move them shortly, but at the same time, there was an email - people can either get them or not.  At this point, I just want my damn lunch.  I'm waiting on one colleague to go grab the order, and I am trying hard to not eat the pizza that they ordered for some folks' last day.

I did have a piece because, Pizza Hut, dammit.

Anyway.  It's the last day of the month and quarter, at least from a work days standpoint.  I got to get the new bulletin board up today, and it turned out pretty damn cute, even though I wasn't entirely feeling it.  Which happens.  April's theme is  be "Bloom Where You're Planted" - which is vague, pleasant and springy. 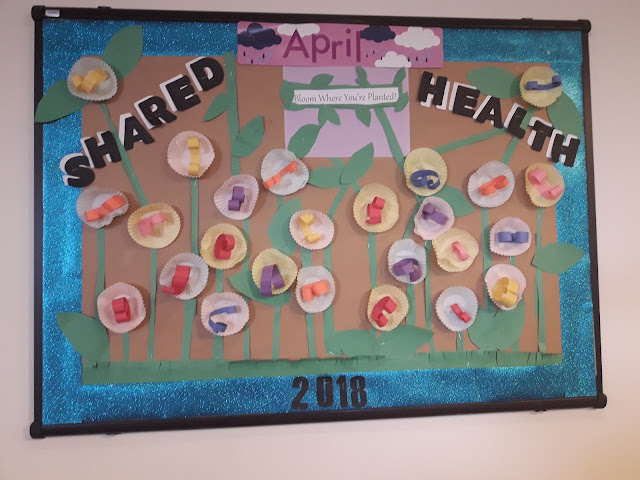 I feel stretched a little thin.  I know a lot of it is poor diet, but I know even more of it is sleep - as in, I sure could use about a week's worth.

Here's where I am going to take a sharp turn into a new topic.  As is my privilege.

I have been thinking a lot about idolatry recently.  Work with me for a second.  I think society as a whole, and people in very specific ways tend to idolize things that maybe aren't worth it.

Sports figures, celebrities, people who are famous, or have money.  And those are their only redeeming qualities.  People seem to place a high value on these folks.

And OK - here's where I am going to admit - I think PK Subban is a delightful person.  Not because he's great at hockey, which he is - but because he's an unlikely hockey star.  Black Caribbean-Canadian, whose parents made him a back yard rink - now he and his two brothers are making a living playing.  But I'm a fan because PK has given $10 million to the Children's Hospital in Montreal.  Here in Nashville, he runs a program that pairs police officers with at-risk youth for a mentorship.  He gives up his seats at the game for the program.  At Christmas, they made him up as an old man and he went around town giving people presents and doing good things.  He's having a ball doing it.  He's flashy, and showy, and he's a pain in a lot of asses - but I genuinely like the guy.  But he's just a guy who has a job he likes and is good at, and he wants to do nice things for people who need a break.  That could describe half the people I work with.  It's just that PK gets press for it.

Anyway - I've been watched those who have become overly obsessed with someone and it's  usually someone who doesn't do much for me.  It's not that the celeb doesn't have some merit, it's more that if you read up on her or him - s/he did some things that are really not admirable.  It's a long, long story.  It's just me ruminating on some shit that I can't really put into words.

All I'm saying is, if you're going to go all-in on a person, be willing to admit to the good, bad and ugly.

And, another swift lane change:

Some great movies are coming out soon - the new Amy Schumer comedy, Ready Player One, a bio on Mr. Rogers... some good shit.

My plan for tomorrow is to continue the decluttering process.  I think I might have to clean out the freezer.  And get some decent food into the house - because I have been pounding sugar and I feel like complete and utter crap.  Maybe a quick trip to Trader Joe's, get some pretty flowers... I don't know.

I do know that after a week of cakes, and some candy, and not much green or fruit-like... I need a serious detox.

So, there you have it.  Don't worship false idols, lay off the sugar, and enjoy your decluttering and  craft projects.

Love you, mean it!