on February 19, 2018
So, I haven't much followed the Olympics.  Growing up in the South, my interest in and understanding of Winter sports is not exactly robust.   Hockey, aside, of course.  And even that's recent - and basically limited to the NHL.

I have enjoyed the few little pieces I've read about Glamazon Bitch Adam Rippon, the commentary of Johnny Weir and Tara Lipinski.  I mean, who doesn't love a little pageantry?  I'm aware of the oiled up man candy from Tonga.

A French ice dancer twizzled out of her top. Gabriella Papadakis, which is an incredibly French name (?), age 22 had a little wardrobe malfunction.  Namely, her breast broke free from the sparkles, fringe and glitter of her halter top, and made a run for it.

It is, what we'd call in the United States, a Nip Slip.

She recovered, and yanked everything back in place and kept on ice dancing, then got off the ice and cried.  Like you do. 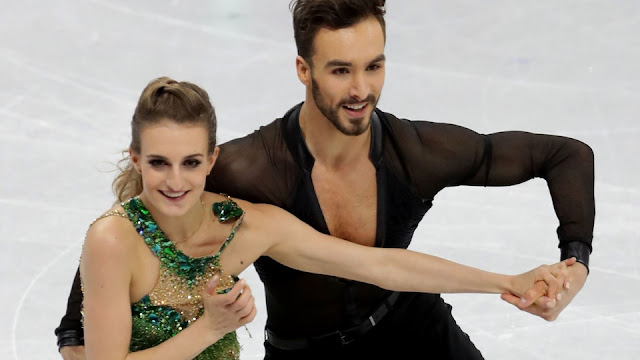 That green strap at the top was intended to be securely fastened around her neck. It started there, and ended in a gravity defying tangle.

Look, it sucks.  Nobody wants their top to fail on international television.  Well, maybe some people, but not Olympic Athletes.  But the outfits are being stretched and twisted and tossed and turned to their limits.  Things are going to happen.

We've all had wardrobe malfunctions.  I've had zippers that either wouldn't zip down, or up.  I've had shoe straps and heels give way.  I've had fallen hems, lost buttons and rips.  I've had bra straps break and underwires come loose, and I've tucked my skirt into my tights.  I've worn two different shoes.  I've worn navy thinking it was black, and black thinking it was navy.  I've had the dye in shirts wear off on my skin, turning me blue.  I've given myself clown mouth by nervously putting on lipstick, then drinking out of a solo cup and reapplying lipstick with the cup. I've been overdressed.  I've been underdressed.  I've worn the same dress as someone else at the same event.

When I was in 7th grade, I bought this fabulous sweater that had a cheerleader on the front.  She was holding pom-poms - that were actually 3-D and sewn onto the sweater.  They hit at a very, very unfortunate location on my person.  Why I didn't notice that, why my mother or the (wait for it) personal shopper that I had enlisted didn't see it... well, shame on all of us.  Some boy on the bus saw it and immediately said, "Nice Pom Poms!"  I wore it exactly once, then it mysteriously went to the back of the closet forever.   I am grateful that my mother didn't ask questions.  The other sweater I picked out was a much better idea black and white with a red collar.  I wore it for my 7th grade photo.

But my biggest wardrobe malfunction occurred at age 17.  I was in Mexico for Spring Break.  My travel companions were both drinking heavily and poolside.  It was our last full day there, and I had not been in the ocean.  The beach and ocean there were kind of rough, but I wanted to go in.

So, I did.  And it felt great.  I got out of the water, happy, sunburned and pleasantly tired.  I walked up the beach to head back to our hotel and meet my friends.  About halfway there, I am stopped by local gentleman who is frantically trying to tell me something.  I don't speak Espanol, so I'm at a loss.  Finally, he reaches toward me and pulls down the top of my bathing suit.  I had been wearing a bikini, and somehow, one of the puppies had managed to escape under the fence, if you will. It was warm enough that I didn't notice, and it never occurred to me to check my suit.  The good news is, nobody who saw it knew me.  I was vaguely horrified, but I thanked him and kept walking.  That was the last time I wore a bikini.   It's for the best, really.  To be fair, it was my sister's suit originally, and we were not built the same, and it wasn't really a good look for me.  I'm definitely more of a one piece girl.  I'll do a tankini, but really, coverage is key.

So, Gabriella - file this under M for "Merde Happens", and move on.  You are getting some good press.  People are sympathetic, and now, everyone knows your name.

And to everyone else who has ever ripped, shredded, pop, split, or other compromised your ensemble, take comfort.  Nobody gets out of this life unscathed.  Pain is inevitable.  Suffering is optional!

Christopher said…
At the time Ms. Papadakis had her wardrobe malfunction I was probably watching The Incredibles which was on another channel, and I'm glad. It's unfathomable to me how hard the athletes work to get to the Olympics, even the oiled guy from Tonga who may not have a lot of competition in his home country but is still making a great effort, but I still feel bad about any mishap.
Anyway you've pointed out that Olympic sportswear should be designed by Edna Mode.
And glad you went in the ocean in spite of the result. Never pass up a chance to venture into the big blue.
February 21, 2018 at 1:13 PM