on February 05, 2018
Folks.  I think I've talked before about my beliefs - and that I'm not a religious person.  So, I don't pray.  I do keep people in my thoughts and try to send good energy their way, which is the non-religious version of prayer.

There are a lot of people in my life at the moment, who are for various reasons, hurting.   Strained relationships, sickness, difficult decisions, fear, anxiety, guilt and uncertainty.  People who are waiting to know what's going to happen next.  And knowing that what's next is probably going to be some variety of shit sandwich.

And there's nothing I can do.  Which is hard.  I'm not a doctor.  I'm not a lawyer.  Even if I were an Indian Chief, that would be pretty useless.

One of my best friends and I joke about people who call on their "Prayer Warrior" friends in times of trouble.  Because they are usually called on for things where the actually action that would help is either money or legislation (school shootings, natural disasters).

But at some point, all you have is thoughts and prayers.  And OK, maybe I could make a pound cake, or offer an ear, or... I don't know - that's about it.

What do you do when you can't do anything?  Sounds like a Zen koan. 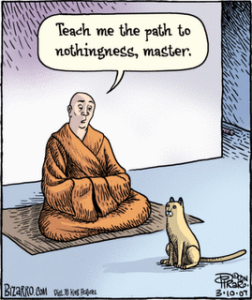 There's no good end to this post.  Mostly because we're waiting on what happens next.

Chuck Baudelaire said…
Knowing that you would make me a pound cake in my hour of need means more than you know.
February 5, 2018 at 10:13 PM

Christopher said…
A few years ago the LA Times had an article about The Ring Theory of Kvetching. Basically it's this: the person most directly affected by a crisis is in the center ring, and it occurs to me that you've probably already read it and even if you haven't read that specific article you've got a good grasp of the principle.
Anyway the reason I bring it up is that center circle can be a scary, lonely place, and for when you're in it there can be great comfort in having someone outside to catch you if you fall.
Or in having someone outside it baking a pound cake.
February 7, 2018 at 1:25 PM