The Knees Have It!

on January 01, 2018
Today is the first day of 2018.  And while parts of last year were a total shitshow, there's plenty of good that happened.

I got a new job  - that was the big one.  I can't explain how major it as been for me.  If you've been reading this for any amount of time, you already know that.

Anyway - Matt and I celebrated New Year's Eve in a very low-key mode.  Take-out, movies, Adult Swim.  I highly recommend it.  I'm late to the game, but Rick & Morty - I'm kind of in love.

Today, I went to the mall, specifically because Dillard's was having a massive 50% everything marked down sale.  I started buying a pricey shirt at Macy's (but gorgeous - had to have it).  Bought a less pricey shirt at JC Penney, then went to Belk,  where I hit the motherlode.  Two pair of dress pants and a shirt.  Kaboom.

By the time I got to Dillard's, I was kind of shopped out, and that's a good thing - the place was a madhouse.  Lines at least 10 long at every register.   Forget that.  I suspect that even if all they were selling were cat turds rolled in glitter, people would want them because they're half off. 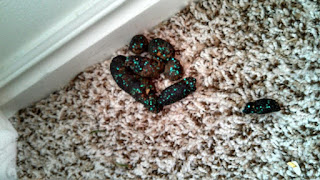 My friend Jim was finishing up his little Dillard's Spree, so we met up and went to lunch.  I got caught up on all the latest, and it was good to see him.  He just became an uncle for the first time, so I got to see pics of his niece.  Fun stuff.

Tonight, we had our annual New Year's meal of greens and black-eyed peas.  I make them into a soup with tomatoes, and green salsa and some spicy chicken sausage. I also made some cornbread, and it was solid.  I know my way around a cast-iron skillet.

Back to the office tomorrow.  And with that, we'll be getting some clarity on some changes that have happened with our current project.

So, it's cold as living hell in Nashville. It's currently 10 degrees out.  The thing about this house is that, at a certain point, you can't heat it to an acceptable temperature.  You would be spending hundreds of dollars and not really getting the value.  We have agreed as a family that we would rather bundle up, but honestly, there are days I consider taking up tanning again, just to warm up.

Oh, yes, people - I used to fake bake.   In college, Winter Quarter.  We would jump in a car (Kathy's, usually), and make our way to the tanning salon, where we would lie in the UV Coffins for ten minutes.  Kathy always favored a specific bed because she thought it was stronger.  I always showered when we got home because there was this freaky nasty smell that tanning gave off.  It was probably cancer cells roasting and caramelizing.   We did it for two reasons - one, to get through the bleak, gray winter days. But two, and probably more important - our formal was in February, usually late February, so we wanted to look good in our dresses, which typically showed skin.

Aside from just feeling a little cold from time to time, there are a few things that the cold weather affects.  For one, I'm parched.  My skin, my hair, my internal organs - they all need hydrating.  I need to get my water habit back on track.  I also need to slather up with lotion, and at some point, put a treatment on my hair.

The other issue is joint pain.  I have somehow messed up a knee, and it hurts like a mother.  I have been giving it the occasional blast of Icy Hot - which is more icy than hot, and it helps a little.  I need to hydrate to lubricate my joints, and I need to start using them in a sporty/physical kind of way.

I've really enjoyed having some time off - but I'm ready to get into work and make 2018 amazing.

I do have some resolutions, of course.  But they'll keep for my next post.

Bill the Butcher said…
The UV would do your mood good. I hate winter - the low light and cold have a ruinous effect on my psychology. I always get into a deep depressive trough in December-January.