on January 04, 2018
So, I was thinking about my resolutions, and I need to add two.  They're related, and fit into the overall theme of the stuff I listed yesterday.

6.   Get prompt.  I used to be relentlessly on time.  I got a little lax on it at some point, and I need to get back to that old, good habit.  Better to be an hour early than a minute late.  It's time to be on time again.  Got it?  Good.

7. As far as time is concerned, I need to stop wasting time and energy on people who don't deserve my time and energy.  An example.  I have a classmate from back in the day who I have quasi-reconnected with on Facebook. I have been reminded by his comments why I hadn't really kept up with him to begin with.  So, this is someone who I need to ignore, no matter how much I want to prove to the world at large he's a jerk, he doesn't deserve my effort.  And honestly, I'm pretty sure he'll let his d-bag flag fly without my help.  So, no mas.  And not just him, but anyone on social media or in person who doesn't deserve my time won't get it. 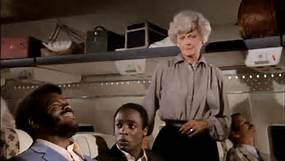 I think Barbara Billingsley said it best in Airplane, "Chump don't want no help, chump don't get no help."

Honestly, there is so much in that movie.  It is underrated.

Anyway, I thought about both of those this morning and wanted to add them to my list.  And why not?

The cold weather here in Nashville continues.  We won't get above freezing again until Sunday, and that sucks.  Oh well.  I washed my hair tonight so that I won't have to do it in the morning, when it's going to be 7 degrees out.  Yeah, you read that right.  And I live in Nashville, where in theory, it should be warmer that that.

I don't have any major plans for the weekend, which is good - I'm kind of thinking of sleeping a good bit - I have been crazy tired this week, and I don't have to pack this week, which is big.  My travel schedule has been completely upended -and we'll know more in the next few weeks, and we'll adjust.  Bend or break, folks.

I would like to do a little more shopping, due in part to the frigid weather.  I could use one or two sweaters.  I typically prefer lighter material, even in the winter, because I overheat.  But I'm thinking this may be the winter where I cave a little.

I need to get a lot of fruit and vegetables into the kitchen, and come up with some different meals to cook.  I made one of my favorites tonight, but I realized I'm the only one who actually likes it - gotta figure out something mutually agreeable.

It looks like we'll have a good month.  We have tickets to John Mulaney,  I get the day off on MLK Day, I see my ladyparts doc at the end of the month to make sure that nothing too terrible has happened to my ladyparts.   So you know, just living the dream.

I learned that one of my colleagues is *flying* to Atlanta for a vacation later this month.  We're not tight, but I overheard her talking about a great restaurant in Atlanta, and I asked which one.  Benihana.  Yeah, you read that right. Ben. I. Hana. Whyyyyyyyy?  There are hundreds of great places to eat in Atlanta.  She also mentioned Pappdeaux's.  Yeah, there's one of those in the Houston Hobby airport.   I mean...I just try to avoid chains, but that's me being a snob, I guess.  Also, I wouldn't fly to Atlanta, but it's her time, her dime.

So, colleague - you do you.  Enjoy your yum yum sauce.

And with that, I'm going to wind down before bed, pet the dog, watch a little hockey... the usual.

Christopher said…
The second most frustrating thing about the weather is telling someone I know that it's 7 degrees out and then having to explain that's Fahrenheit.
That's when I realize most of my friends are in other countries. Of course I have friends right around me too, but also a lot of people who are alive but unconscious.
Just like Gerald Ford.
January 5, 2018 at 8:44 AM