First things first.  I took Piper to the vet Saturday to get her bordatella updated.  We took her into the exam room because she was barking like a jackass at another dog.  They left her file on the exam table and at the top were three notes:

- **Can be aggressive toward other dogs**

So, that's helpful.   I had seen the Nice Dog note on there in the past, but the other two were new.  I asked the doctor about it and she said that some dogs get more worked up than others and it can change from one visit to the next.  She didn't deny that my dog was nice, aggressive, or aggressive toward other dogs.   We briefly talked prey drive, and she explained that it's nothing we can fix, and don't get mad, because she's not doing anything wrong.  She's also gained 5 pounds over the summer and we need to get that off.  At least it was a cheap visit, but I left feeling like I have failed with raising Piper. Sort of.  I did tell them she has a new friend, and that's awesome.

Look, my dog is fine.  I'm happy, she's happy - what do I care about an anonymous note on her file.  I'm sure I have a lot of unflattering stuff on my charts.  Hell, Seinfeld did a whole episode on this.

So, fuck it - they're a good clinic, and they haven't kicked us out.

Anyway - I brought my bad girl home, and then I went about a mile away from the house for some bliss.

There is a company out of Nashville called Shenanigoats - they offer classes where you do yoga.  With goats.  A woman in our neighborhood hosted an event, so I signed up.

It was FANTASTIC.  I got there early enough to play with the goats, and one little guy came to take a nap on my mat.  Once class started, this sweet, handsome boy named Harvey Milk came over.  He came over and while we were doing seated stretches, got in my lap.  He stayed there for the rest of the class and I petted him and told him what a good boy he was.  Harvey, I learned, is a fainter.  So he loves attention and people, but won't do a lot of jumping or climbing.  The owner of the company came over and told me that Harvey picks out someone in every class, and that I was his "person" for the hour.  Honestly, it was the best feeling in the world.  I petted and grinned and laughed.  He was my little pal.  After class broke up, we got some pictures together.  Me and my new pal, Harvey. 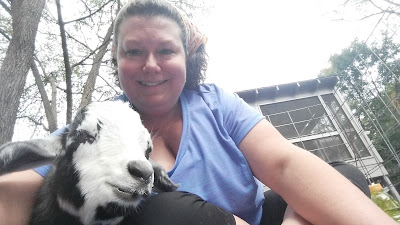 Then, yesterday afternoon, I made a batch of curry butternut squash soup for a party that night.  Around 5, I headed over to Paige's house for a soup swap.  Everyone brings a crock pot of their fave.  We sample, we put the rest in containers, and it goes home with other people.  Super fun.  One of the highlights of fall.  There was good conversation, spice cake, and of course soup.  Tons of good soup.

This morning, I got up, did the usual Sunday grocery visit, came home and made slaw.  We had a lunch date with our friend Jim.  We ate hot dogs, talked about everything, and just chilled.  I love my friends.

Matt and I went to JC Penney after Jim's to look for a shirt Matt wanted.  He bought one early this summer - it's fairly distinctive, and it's really sharp looking, so he wanted to have a back up.  No luck at the store - we managed to track it down online.  We did find him 2 other great shirts that will bulk up his winter wardrobe.

And then we came home.  Watched some TV, grilled some burgers, and now, it's time to wind down.  It was a busy weekend.  But so much fun.  SO MUCH.

You just have to be willing to be foolish enough to get down on the ground with your caprine yoga partners. 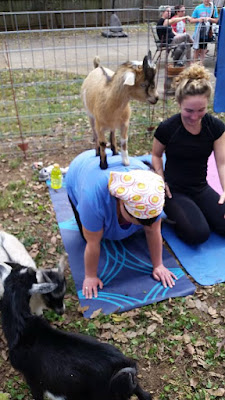