on October 06, 2017
After Dad died, in advance of his memorial service we pulled a box of photos and papers for some older pictures of him.  I came across a letter that caught my eye.  I took it, and a few random other items and brought them back to Nashville.  I had completely forgotten this letter until yesterday, when I was looking in a desk drawer for another photo.

I read it, and decided I'd share it here. 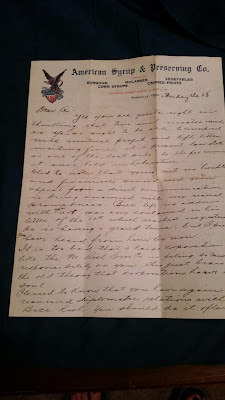 Below, I have transcribed a letter written from my Paternal Great Grandfather to my Paternal Grandfather.  Give it a read and I'll help with context afterward.  Spelling, grammar and punctuation uncorrected.

Yes, you are quite right in thinking that two such master minds as you and I ought to be able to correspond with mutual profit and lift letter writing from it's present low state as one of the ,,lost arts" to the pre eminence it once held in Literature.

Glad to note that you're not in trouble and financially sound and your appeal for a direct communication is being answered with my usual promptness.

Bill left no address with you, nor was any contained in his letter of the 10th which reached us yesterday.  He is having a grand time, but I presume you have heard from him by now.

It is too bad that a large corporation like M. Rich Bros. Company is piling so much responsibility on you.  It just bears out the old theory that corporations have no soul.

Pleased to know that you have again resumed diplomatic relations with Bill Rich.  You should do it often.

Will deliver your message to Aunt Doc and you will no doubt hear from her.

The Mills & Sobel contingent returned from their trip yesterday and very enthusiastic about their stay in Atlanta.  Aunt Helen said very nice things about you.

I am not planning to come to Atlanta soon, but when I do, I shall send you a map of the city and designate the exact location with coppy of letter about two weeks before my arrival there & I hope to see you at the station about the time my train plls leaves.

Everyone here is well & (more or less) happy.  The base ball season has started as per usual with young Julius getting black eye trying to stop the ball with his head instead of his hands.  He seems to have inherited your athletic tendencies. Well, there is no law against trying.

I would like do this indefinitely,but I am being disturb continually so I stop for the present till I hear from you again. With much love from,

If you notice, the quotation marks he uses were common with European folks at that time - he arrived in the US from Hungary, and so English was actually maybe his 3rd or 4th language.  I know he spoke Hungarian and Yiddish, and given his birthplace's proximity to Germany/Austria, it's likely he spoke German, and then of course, English.  He lapses into sentence structure that makes my point a few times, but it's fucking impressive, regardless.  Especially because it's a humorous letter, and it's hard to make jokes in a language unless you have a high level of fluency.

Note that the address is Houston Street, Nashville - it still exists, by the way - it's near Fort Negley/Greer Stadium.  The second part of the address had me confused, but I figured it out.  It's the Nashville, Chattanooga and St. Louis Railway.  BOOM!  They shipped the foodstuffs for the American Syrup and Preserving Company. Now it's worth noting that when Julius went home that night, he ended up on Acklen Avenue, the same street I now live on (though he lived East of Belmont - I live west of it.  Alas, I was born four years too late to meet A, and 37 too late for Julius.

It kills me that even as early as the 1930s, Julius was lamenting the lost art of letter-writing.  This letter is written in longhand, cursive, on stationery with a fountain pen.  That to me is so elevated.

The financially stable section... don't know what that's about, but it feels like "I'm glad you were moved to write me even if you don't need money".  Both the Breyer and Rich sides of the family were, in a word, comfortable.  I think the Nashville contingent lived more modestly, mostly because I think they were in a line of business that wasn't related so closely to personal appearance.  I'll get to that in a second, though.

The Bill referred to here is William Rich Breyer - A's (younger) brother for whom my father was named.  He traveled as a journalist with the Red Cross later in life, but, it's not likely that is the case here.  Sounds more like a pleasure trip, where Bill has been a little careless in staying in touch.  Uncle Bill did some nice things for us over the years.  Bought each of the kids of his nieces and nephews shares of stock.  Somewhere, I have the letter he wrote my parents to inform them that Laura and I were shareholders with The Southern Company.  He loved to travel, but was sick and his doctors "clipped his wings" - his words.  So he used his money to buy a bunch of stock, which I kept until I was in my mid twenties, then cashed in because I lost my job and was flat ass broke.  I cried.  My sister still has hers.

M. Rich Bros. Company.  The Rich Family was Julius' in-laws.  He married Theresa Rich.  Her father, William Rich (for whom Bill was named), was the brother of Morris Rich (M. Rich) and Bros. (Daniel and Emanuel).  So, the M. Rich Bros. Company was the full name of Rich's Department store in Atlanta, founded in 1867.  So, here, Julius is dogging his wife's uncles.  The idea that people were talking about soulless businesses in 1930-ish makes me laugh.  I think it must be tongue in cheek, at least a little.  Rich's did a lot of good things in the community (they paid teachers salaries during the depression, for instance), so I think he has a point, but it's exaggerated.  It's worth mentioning that the Breyers and Richs were probably more closely knit that it would appear.  If you trace it back a few generations, there's a lot of cousins marrying cousins.  They were Jewish, living in the Southeast, and so, there were only so many Teitelbaums and Lovemans to go around.

The Bill Rich mentioned here would appear to be Daniel's child.  Morris had girls, Emanuel does not appeared to have married.  So Daniel's son was the next generation muscle.  I think here, Julius is making fun of Bill Rich and A's relationship.  It's probably cordial but strained - it's a power play between two cousins.  After all, Bill is a direct descendant of one of the M Rich and Bros. A was only the son of a Rich sister.  Bros before hos, I think we'd say in current parlance.

Aunt Doc was one of the women in the family.  She was the first woman to graduate from Vanderbilt Dental School, hence, Doc.  I think her given name was Carrie... still, she was a big deal.   I need to figure that out.

No clue who Helen, the Mills or Sobels are.  Not going to guess, except that Aunt Helen seems to enjoy A. The only Helen I know in A's life was Helen Asher, but she was a contemporary of his - wife of his best friend.  So, not that Helen.

Julius' Atlanta itinerary is him messing with his kid, and that's kind of charming.  You know they like each other. It's nice to know that they had a friendly relationship.  What's cute is that Julius is extremely formal with details, then delivers a sly zinger.

Young Julius is A's brother.  A was one of eight:  Five boys -  A, William, Bernard, Robert (he drowned in the Cumberland River as a kid) and Julius.  Three sisters - Amy, Rose and Lucie.  So, how young was Julius while playing ball?  No idea. But he's terrible at it, it would seem,  Poor Julius.  .  I only ever met A's brother Bill  - and I don't remember him, and his sister Rose, who I liked a lot.   I have also met Rose's daughter Amy, but that is another story altogether.  My grandfather, by Dad's account was kind of klutzy.  Like me, he was left-handed.  Dad said watching me try to use tools was as painful as watching his father.  So, fine.  A and I had that in common.

I appreciate the constant interruptions.  I haven't had to cause or deal with either recently.  So there's that.  But Julius was busy running a successful business and was the head of a large family.

A side note.  My grandfather graduated from Hume Fogg HS here in Nashville, then traveled to Atlanta to study at Georgia Tech.  He did well there and came in second for the French Prize at graduation.  He was irate because the guy who won was a native speaker.  I agree, that's some serious bullshit.  A, I am told, would have loved me.  He loved language, theater, travel... bummer.  Anyway, one might wonder why A ended up in Atlanta working for the Rich family, rather than move home to Nashville to run the family business.  Here's what happened.  One summer, A was home from college and helping his father.  He somehow managed to leave an entire boxcar full of strawberries out in the sun over a weekend and they rotted.  So, his father suggested he consider a different line of work.  I think he also fell in love with Atlanta.  Although, they made him get some experience elsewhere before coming in to Rich's and I believe he spent a few years at another department store in New Jersey.  By the time he retired, he was Vice President of the Store for Homes.  I have another letter I'll post about sometime - it's from one of the Rich cousins to A during the war. It's fucking fascinating.

Anyway.  I found this letter and thought I'd write about it because, well, honestly, it's a great letter.  There's a lot of feeling in it.  And I wish I had know the sender and recipient.  I wonder if they would have liked me.  I wonder if I would have been offered work in the family business.

We'll never know.  But it's fun to think that Julius, A and I have all walked the same streets, in the same city lifetimes apart.

And that a million molecules had to all line up in just the right order for me to be sitting here, writing this blog post. 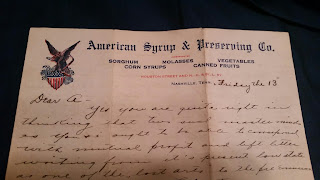 Christopher said…
I always feel a little guilty reading other peoples' correspondence, but it's still wonderful to to be able to read such a well-preserved piece of family and local history. The bit about the "lost art" of letter writing made me laugh too.
October 10, 2017 at 11:41 AM