on October 10, 2017
If you, like me, were heavily exposed to the soundtrack of Les Miserables in the late 80s, early 90s, you might remember a song called, "I Dreamed a Dream" - sung by the character Fantine.  She starts the song with a little prologue talking about all the good times that proceeded the time she's about to sing about.  The final line is, "There was a time... when it all went wrong...". 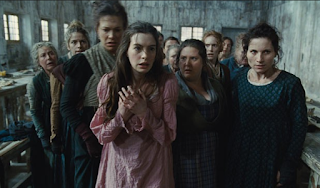 Well, I always remember that line when my Facebook "this day in history" gives me this: 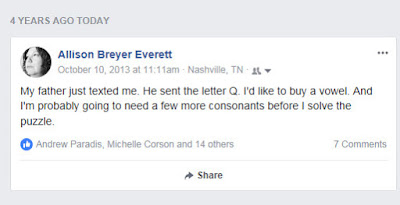 Dad wasn't texting me.  My mother was frantic, trying to use Dad's cellphone to let me and my sister know that Dad was at the hospital and had just had a stroke.  When she called me about 30 minutes later, I was on my way to lunch.  I was on the bridge at Cool Springs.  I calmly turned around, called my boss, grabbed my laptop and headed to the house to throw some clothes in a bag and haul ass to Atlanta.
There was a time...when it all... went... wrong.
Dad never really recovered.  I mean, he survived five more months, but that was quantity, not quality.
It's kind of a shame that Facebook reminds you of days you'd rather forget.
Not that I'd ever forget.  What I do remember is insisting it wasn't bad enough that my sister needed to fly in from California.  But she did, and of course, it kind of was that bad.
To quote another song...
"Always something there to remind me..."
Of course, that's a love song.  But still.
In the Naked Eyes version, there's some percussion that starts at roughly 1:56 that has always sounded like someone dropping ice into a glass.
Just saying.
Also saying, if you have never listened to the Lou Johnson recording, you need to.  Stat.
Dionne Warwick can pound sand on this one.
Happy 10/10, y'all.
And even though it all went wrong for a time, I'm calmly turning around and moving forward.
ae
﻿

Bill the Butcher said…
My father literally died in my arms while I was giving him CPR.