In 6th grade, I had to make a tote bag in my Home Ec class.  I worked on mine a lot, and I ended up getting a D on it, maybe a mercy C.  I made up for it with the cooking portion of the class and I managed to eke out a B over all.  It’s not that I didn’t care; it’s that no matter how hard I worked, the damn thing just wouldn’t behave.  I had picked a fabric that wasn’t especially right for the project, and it would bunch and disintegrate and unravel.   Later in life, about seven years ago, I asked for (and received) a sewing machine for Christmas from Matt.  I made some throw pillows, a few pajama pants – and again, it wasn’t pretty, but I managed.
I have never learned to knit or crochet and I find fancy sewing; that is to say, cross stitch, or needle point, or crewel, or embroidery to be incredibly tedious and boring and I end up leaving my O positive all over the fabric, and if you were to look at the backside of the piece… it was fugly.
Now, that said, I occasionally need to be able to sew on buttons, or fix a loose seam, or whatever, whatever.  Again, it’s not pretty, but I can do it.
Which brings me to this morning… I was running a little late – all my fault – I couldn’t un-ass myself from bed.  It happens – especially after a long weekend.  Anyway, I got up, showered and quickly threw on a dress that has been a wardrobe staple this season.  I slapped together some breakfast, grabbed my cake for today’s potluck, and ran out the door.
I needed to stop at Walgreens to purchase my morning caffeine and a garnish for my cake (more on that later). I am hustling out of the car, and I notice something messed up about my dress. 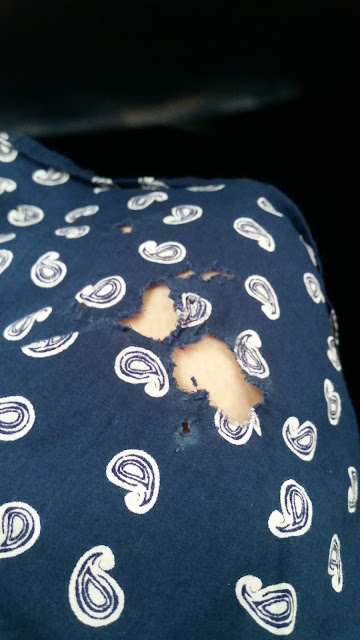 So, that’s some holes.  Thankfully, they’re at the knee level, near the hem.  In addition to caffeine and garnish, I purchased a sewing kit.  Specifically, the kind that’s a bunch of pre-threaded needles in a variety of common colors.  These are genius, because, to be honest, I can’t thread needles like I used to.  My eyesight is going (more on that later, as well), and that makes it a challenge – but the bigger issue is that my hands aren’t all that stable.  My hands are a little shaky on tasks that require fine motor skills.   I briefly went down a Google rabbit hole searching hand tremors.  I’m either fine or dying.  Whatever.
Anyway, I got to the car and whip-stitched the holes and went on my merry way.  It looks wonky, but the dress is a dark color, loud print, and I assume nobody is getting that close to my kneecap to check my handiwork. 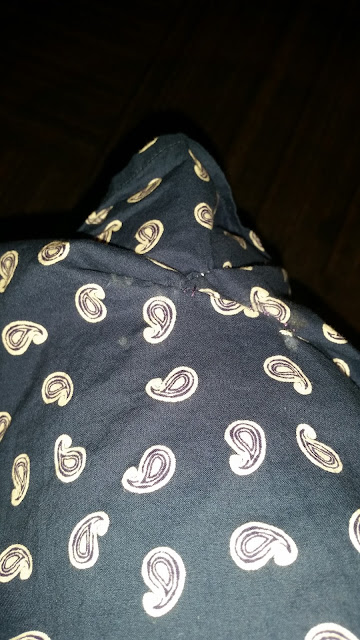 I checked the website from whence the dress came, and it’s still available, but I’d have to size down on it, and I don’t know that I’m ready for that.  I think I need to face the fact that this dress is now for grocery store runs on the weekends, and not for work.  It served its purpose.  The same website has a plethora of other dresses in more seasonally appropriate fabrics as we make our way into fall.
OK.  So.  First the fun stuff.  I made a cake for work.  It’s one my mother taught me, and let’s be honest – it’s kind of a cheat – it’s a box of chocolate cake mix, a box of chocolate pudding, a bag of chocolate chips, and replace the water in the recipe with either rum or brewed coffee.  I went with coffee since it’s a work cake.  I put it in a bundt pan, baked it and it’s lovely.  I will be garnishing it with mini M&Ms, as it is an unfrosted cake.  That’s the garnish I referred to here at the beginning of the post.  It’s a good little cake.
I went to the eye doctor last weekend and essentially, I’m getting old – and that’s fine, we all knew that was coming.  Along with that, though, is presbyopia.  Old eyes, in Greek?  Latin?   I just checked – modern Latin by way of Greek from the word presbus, meaning old man.  So that’s fun.  Anyway – I had three options.  Ignore it, get a pair of readers, or get bifocals.  I decided to get some readers – prescription, because, why not.  And I have to say, I think they’re adorable.  I’ll wear them for reading, teaching and so on.  Within another 3-5 years, I’ll need the bifocals for realsies.  She said to put them off as long as possible, though.  I appreciate her honesty.  With my vision insurance, it was all remarkably cheap, and I am happy that my eyes are otherwise in good shape.
Speaking of shape – I need to get back on the diet – I have been eating with wild abandon the past… month, if we’re being completely honest.  Today is not the ideal day because of the potluck (see the aforementioned cake).  And, again, in the interest of disclosure, I ate a package of Ho Hos this morning, as I frantically sewed my dress in my car (while wearing it, by the way).
That whole Mindful Eating program is going swimmingly. Just swell.  Bllarrrrrrrggh.
I really just need to get back on track.  It’s easy to say, harder to do.  Sugar is my biggest weakness.  If I can go cold turkey on that, we’re golden.
I had a great long weekend did some serious deck sitting with my friends, spent time at the zoo with my husband, did some jelly making… why, yes, I did say jelly making.  I canned a batch of it, and it was, I have to say, pretty tasty.  It’s crazy hot.  I used a ton of hot pepper – including some Carolina Reapers.  In researching them, I learned that they were bred in South Carolina at the PuckerButt Pepper Company.  If that’s not enough of an endorsement, I don’t know what is. They’re one of the hottest peppers, period.  Top three, easily.
It is some stupid hot jelly.  Batch two, which I intend to make tonight, should pack less punch.  Not mild, but more for gen-pop consumption.
That’s about all we’ve got here today, folks.  Hang in there.  I will too.

Christopher said…
At first I thought you were using coffee instead of rum in the cake because you didn't want to get your coworkers drunk, then I remembered the alcohol would (mostly) bake out, so I figured you didn't want to waste good rum.
That reminds me of how my grandfather (paternal) loved my mother's rum balls. My teetotaler grandmother (also paternal) would scold him and he would say, "It's okay, the alcohol bakes out."
Then he'd wink at my mother because he knew she added the rum after baking.
Great glasses, too. They'll make you look smarter when you're teaching.
September 6, 2017 at 11:47 AM