on August 07, 2017
Today was day one of fifteen at an office in Richmond.  It was a long day.  I hate to say it, but it just seemed to take forever.  We're training on a piece of software that seems really, really simple.  And then on Thursday, I move into a different classroom, different students and they're the ones I worry more about.

Basically, it's a little dull.  It's fine, but it's not especially social.  So, I'm investing my time here in self-care.  For example: 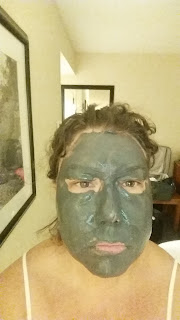 It's not a poor attempt at blackface.  This is a detoxifying mask, which is drying as we speak.  Once it's dry, I will hop in the shower, get this all rinsed off, eat my grilled chicken sandwich from Chick Fil A, and hopefully, get to bed early tonight.

And while I know I said I wasn't going to talk about my dreams any more, I had three last night that were all disturbing.  One involving each parent, and one involving King Kong and a saw.  Anyway... it was not a restful night.  So there's that.

We had a great time at the Lookouts game with Matt's family and some of our pals.  The Lookouts lost, and none of us ended up with a car, but that's totally fine.  The weather was excellent, and so was the company.

See, I need to be social.  But at the same time, I'm kind of done.  Sticky wicket.

So, here's something kind of nuts that happened over the weekend.  I took my beasto, Piper, to a DIY Dog Wash place in East Nashville.  I hadn't been to that one before, but I really, really liked it.  Good tubs, great shampoo, as many towels as you need - not just one threadbare rag.  Free dog cologne.

Anyway - as we're leaving, this nice man was holding the door for us, and at just that moment, Piper jerked her head out of her collar and hit the road.  She ran across a busy four lane road - Gallatin Pike, for anyone local.  She didn't get it, and thankfully, there weren't even any close calls. But once she got across, she was hauling canine ass. The man who held the door for us got in his car, and we both cruised a few blocks to run her down.  I was certain that she was gone for good - then I turned a corner, and nice man and a couple with a French Bulldog had cornered my dog.  I opened the passenger door, called her name, and she ran over and hopped in.

I love that dog.  I also want to shake her furry little carcass and ask her what she was thinking.  But I know what she's thinking.  I think, anyway... I think she is thinking, "Whee!  WHEeEeeEEEeE!  I'm  RUNNING and I LOOOOOOOOOOOOVE IT!!!!"

Bless her fuzzy heart.  And mine.  Because it was beating out of my chest for a good 30 minutes after her great escape.

But mostly, massive thanks to the nice anonymous man who ran down my dog for no other reason than it was a nice thing to do.

So, thanks, nice guy.  I will pay it forward.

And now, my face is starting to crack, and my sandwich is definitely cold, so... I think it's time to move on to the hot shower and dinner portion of my night.

Take care of yourselves.  And each other.

Chuck Baudelaire said…
A long time ago, my ex and I had a beautiful English Setter. She was not a dog you could ever let off her leash. Ever. We were driving across the country once and stopped for gas or food or whatever. The dog bolted from the car as soon as we opened the doors and took off down down the highway service road. Damned if she didn't outrun several cars before she finally came to her senses and made her way back to us. Good times.
August 9, 2017 at 7:46 AM