So, last night I got home from the office and realized I did not have my wallet.  So I checked my car, emptied my bag and my purse.  I scoured my hotel room, checked my bank card (no change) and called the gas station where I'd taken my wallet at lunch (they didn't have I it).  So, following Occam's Razor, I went with the most likely scenario, which is that I'd left it at the office, which I can't access outside of business hours.  So, I just went with that and decided to settle in for the night.  I wasn't hungry, having inhaled tons of sugary snacks throughout the afternoon, so dinner was off the table.

Instead, it was spa night in my room.  I put on some foot peel booties.  I used them once a few years ago - they're these plastic socks lined with a fluid that works to magically blast dead skin off your hooves.  The stuff doesn't work right away - it'll be a few days before my feet start to peel, but I am excited for it to happen.

Then I watched Bachelor in Paradise, read for awhile and slept poorly. I keep waking up either too hot, or too cold.   I woke up to a few messages on my various phones, and got ready for my day.  I have decided that I'm not going to sit down for my breakfast at the hotel for the rest of the week.  I can quickly and easily grab a banana and get a half cup of Cheerios into a sandwich bag, then fix breakfast at the office. Easy like Sunday morning.

Anyway.  I stopped at the Wawa for 44 ounces of pure caffeinated joy, and drove into the office.  There, on the seat next to mine in the classroom, sat my wallet and sunglasses.  That Occam was a sharp fellow.  Sharp like a razor!

So, now that I'm not having to spend my morning cancelling credit cards and getting Matt to FedEx my passport, I'm ready for my day.  And!  I can go out and about tonight without any worry.

We spent the first few hours this morning covering medical conditions; Diabetes, Hypertension, Chronic Heart Failure, Urinary Tract Infections, End Stage Renal Failure, and so on...  I know a fair amount about that.  They're all things we went through with Dad.  So was Hospice, which we covered yesterday.  It's fine, I mean, it gives me a starting point where I have some actual real-life experience, but it's kind of tough.

I'm also going all in on flu shots.  Why would you NOT get one?  OK, I know there are some anti-flu shot people out there, I'm married to one.  But given my exposure to people in healthcare, people whose kids go to daycare or schools, and people in general, I think it's smart to hedge my bets.

So that's been my morning.  Making breakfast at my desk, finding lost things, drinking a huge Coke with Zero Sugar, peeing a lot, and thinking about Dad at the end of his life.

He wouldn't want that.  He would want me to remember happier times.

Here's a happy memory.  Dad was teaching me to drive.  I was late to learn, and it was a slow process.  We often went to this massive cemetery about five miles from the house.  It had small, narrow roads with lots of intersections.  It was a good beginner location because it was always quiet, but added more challenge than say, a parking lot.

Anyway, we would head over to that cemetery to practice pretty often, and  on that land there was some pond space.  And where there's ponds, you'll have birds.  Waterfowl.

Specfically, there were these ducks.

They are called Muscovy Ducks, and they are kind of odd looking.

Not only that, they tend to be a little stubborn and even aggressive.


So any time we drove near them, they would come at the vehicle and try to peck it and they quacked at it.   I love birds, so did Dad - so we mostly laughed and kept going.  But we loved them.

And eventually, I learned how to drive.

But my history of waterfowl and cemeteries didn't start with Dad, but with his mother, who we called Baba.

My sister and I were spending the weekend with her, and it was late fall/early winter.  We ended up going to the cemetery where my grandfather (her late husband) A was buried.  It was the first time I ever went to his grave, it would not be the last (more on that later).  Anyway, she was putting something on his grave, and having never met the man, and given that I was 10 or so, I had little interest in being there.  So, his burial site was/is on a slope of land about 20 feet from the driving path, and another 20 or so from a pond.  And the pond had swans.  And one of the swans came up and bit the fleshy part of my upper arm.

I don't recall taunting the swans, in fact, I don't remember even feeding them.  Maybe we did?  I don't remember - this was in excess of 30 years ago.  I can tell you I was wearing a white blouse.  My grandmother, who was not especially nurturing seemed concerned.  Mostly, concerned that my parents would lose their shit on her.  Which, whatever - they know that shit happens.  But it's complicated, so anyway.  She drives us back to her house, examines my arm and swabs it down with iodine.  It was just a bruise, no broken skin or anything, so I'm not sure that the iodine did anything but threaten to stain my shirt.   It was pretty exciting shit.

Since then, I've warned people of the dangers of swans.  I can't confirm from personal experience, but I believe that geese are equally angry birds.  In a fowl mood, if you will (and I think you will).

Matt and I used to go fairly often to Centennial Park in Nashville.  Notable for its replica of The Parthenon (featured prominently Robert Altman's movie Nashville), there's also a sizeable pond there.  It's oily and scummy looking, doesn't smell too terrific, but it's covered over in ducks.  Mallards, primarily.    There are coots on the pond as well, but a coot is not a duck. 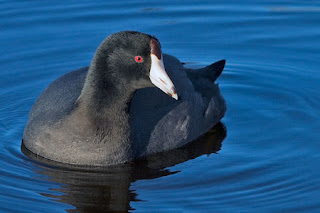 Their red eyes are creepy, but even creepier, they have lobed toes to run on water for takeoff and landing.

Anyway, the Mallards are a common duck, and they're chilling en masse at the park.  They have a call that sounds a little like if a duck could laugh.  So Matt and I would time it and start telling bad jokes to get their community to "laugh" at us,

I was explaining this amusement to Dad, and I ended up giving him a sample of the "laugh" - he congratulated me on my excellent duck call.

That reminds me.  Dad used to have a duck call.  I wonder where it went?

Well, that's enough from me for today.

Take it easy,  but take it!