on August 30, 2017
I have lots of people I stay connected with on Facebook, even if I haven't seen them in decades.  Which is a shame, but it's the way of the world.  At least we have technology to stay connected.

As I've written here before, I was in a club in High School called Odyssey of the Mind.  Well, one of my friends that I made through the club was Matthew, who was in the US for a few years, having come from Australia.  He went back home halfway through my Sophomore/his Junior year.

Today, he posted some photos from our time in OM - apparently his father took them (thanks to Mr. Melvin - these made my day).

I'll start with this one: 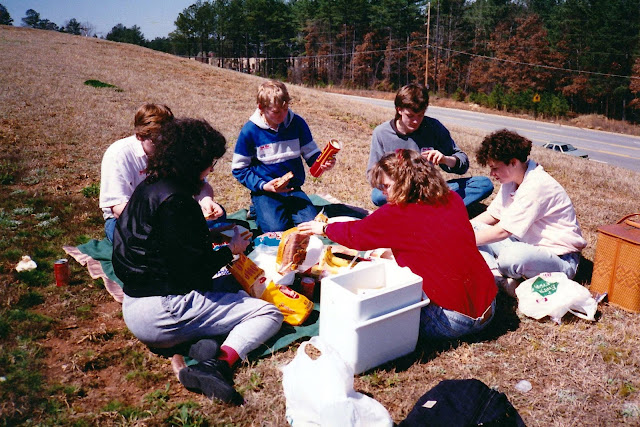 See me on the far right wearing the white t-shirt?  It's Allison, circa 1989!

Psych!  This is my doppelganger, Sara.  For years (before we'd even met), people assumed we were siblings.  I didn't see the resemblance til one day, I was watching a video that had been shot at a school event and saw myself in it.  I thought, "I don't remember this...".  It was her.  But if you knew me and didn't look closely, you would assume that was me. Same with the above.  This would have been before I even landed in High School.  I was in 8th grade.  Sara was 2 grades ahead of me, and graduated with my sister.  She was, and is, a great person.  She is a lawyer in DC now.  We were both amused to have each other as a doppelganger.  And as recently as 2008, I was mistaken for her by our former French teacher.  Sorry, Sara! 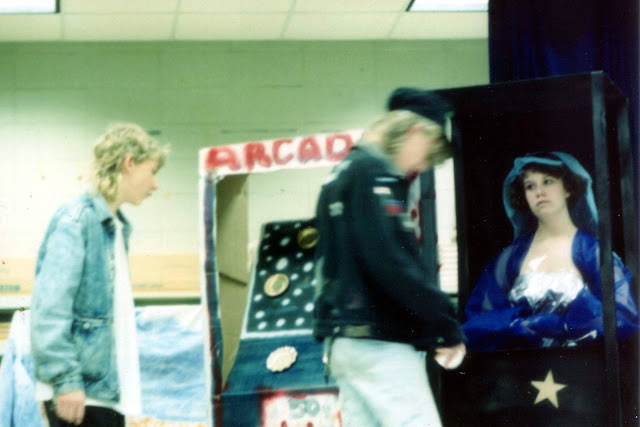 So, this is the opening scene of our skit that we had written.  The theme that year was Seven Wonders of the World, and this is a blatant rip-off of the movie Big.  I am a fortune teller in the booth, and magically, I break free and take these guys on a magical tour of the Seven Wonders.  I love, love, love my resting bitch face in this picture, and the shitty costume.  I look like a Gentleman's Club version of The Virgin Mary. On the far left is Matthew, my Australian friend.  Center is Jim, who I had known since 7th grade.  He is from Sweden.  His mother is one of the loveliest people I have ever met - in every sense. 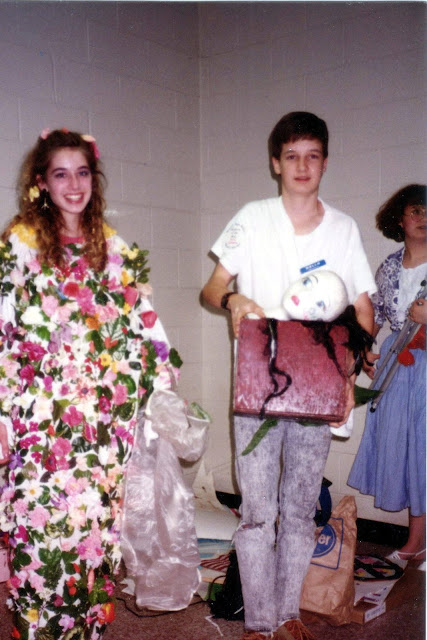 Note the acid wash on Eric.  He's a nice guy - he married a girl one class ahead of us in school, and he's a pilot.  A story about Eric.  We went to take the SATs at Marist High school, and I followed him there.  We were stupid early, and having learned that both my parents and his had given us money to eat a good breakfast, we went to IHOP and had breakfast before the SAT.  I did fine.  I took the damn thing three times, and each time made the EXACT SAME SCORE.  Stephanie is on the left.  She is "The Hanging Garden of Babylon".  She brought this idea up and we weren't, as a team, sold on this concept - but then she went home and crafted it anyway, so...  She ended up doing OM for at least one more year, maybe two.  Yeah, two.  Lots of power struggles.  I'm dressed as a hippie for reasons that I can't immediately remember.  These are not street clothes.  Well, the skirt was.  I had a few blouses I would wear with it.  But the blouse I have on was my mother's from the 70s.  I fucking loved that blouse.  It wouldn't fit me now, and it was a stretch back then, but damn I loved that blouse. 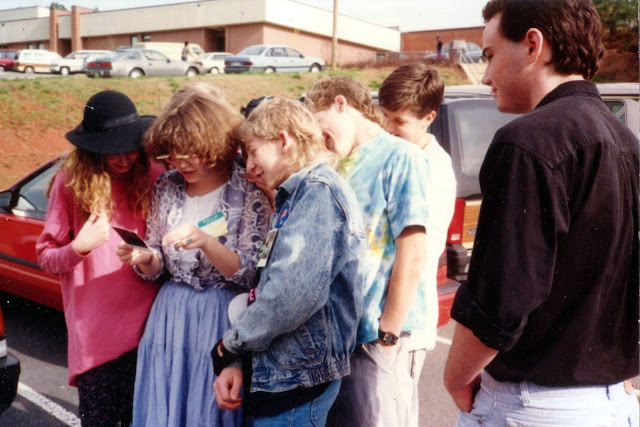 I love this picture.  This is the one that got me to ask Matthew if I could use these pictures for this post.  I feel like the guy in black was Sean.  I can't recall, honestly.  Eric is in back of the cluster, Stephanie is in pink, Matthew is on my left, and behind me is Jonathan.  I adored Jon.  We were friends from 6th grade on.  He was (and still is) incredibly creative, funny, and smart. He is the reason I joined OM.  He called me one night and asked if I wanted to go to Iowa.  That's where World Finals were held that year.  Spoiler Alert!!! I was never on a team that went to World.  Other teams from my school went (and so I went with them).  Anyway, Jon talked me into getting into OM.  He quit after the first year, I think.  I don't know.  We're looking at a Polaroid, as you can see.  We're happy and engaged, and I am surrounded by friends.  It was a good day. 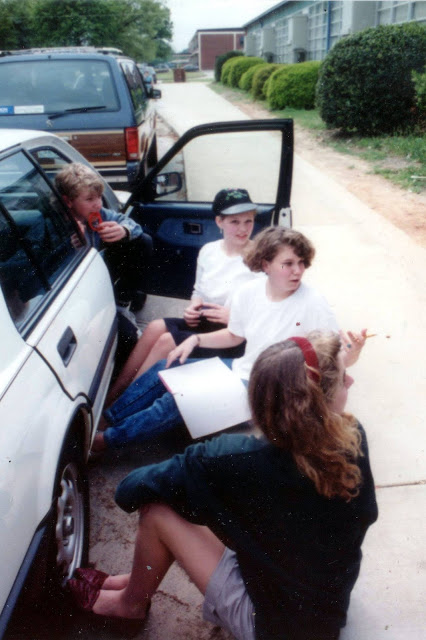 I love the one above because it's evidence that I was/am so bossy. I'm holding my pencil and paper, and I am clearly telling someone, "This is how it is, so step to it." My hair is so early 90s.  It's perfectly triangular. Behind me is Alex.  Well, that's what she went by at the time.  Her parents called her Heather, her given name was Anthea.   She ended up getting into some kind of snit with our faculty sponsor, and she left after our second year.  I think.  Whatever. Matthew is leaning out of the car, and if I had to guess it's before the competition started, because we appear to be filling out our forms.  I totally loved the job of filling out our forms,  and I was damn good at it.

You know, what I love about these photos is that they capture the essence of that time as I remember it.  I was talking with a friend recently about some different events from our lives, and he said he's glad we remember things happening the same way, because that means his memories are reasonably accurate.

But, I remember being happy and social, and creative and loved, and the pictures don't lie.

Christopher said…
It looks like you had a really wonderful time. Also "a Gentleman's Club version of The Virgin Mary" is not how I would describe you. At least not now. Back then I had a knack for saying inappropriate things and laughing like Tom Hulce in Amadeus.
August 31, 2017 at 1:51 PM