I spent the weekend at my family cabin in the North Georgia mountains.  It was delightful. Saturday morning, we had our annual meeting at which I once again realized, I'm basically an adult, and that's terrifying.  Hilariously funny and terrifying.  I ended up writing a bylaw that will be written into our official rules and regs - smarty pants!

The annual social, complete with keg, was a success.  More on that in a minute.

I got plenty of rest. I ended up taking several long naps.  I mean, many hours long.  It was great.

We hiked in the creek, we cut back some brush at the house, fixed the Rhino, cooked, cleaned, and read.  It was a nice little vacation.

So - the social.  We ended up with another keg this year, a Yazoo Gerst.  It was spectacular.  We decided, last minute, that the rain was imminent and we moved the party to the Phoebe Cabin.  Well, that's what it is now.  Before that it was the Almand  cabin - and before that, it was the Peirce cabin.  I am a descendant of the Peirces.

For about six months, Dad was sent to live with them in the mountains.  His parents were estranged.  My grandmother was living in Atlanta with my Aunt Mary (Dad's older sister), my grandfather had an apartment in Atlanta away from his wife, daughter and...son. Why did they ship Dad off to his grandfather?

I don't know.  I don't know a lot of things. Here's what I do know.  Daddy Peirce gave my father a cat (named Tom) when my Dad had the measles.  He was so sick for so long he ended up repeating second grade.  When Dad was a kid, Daddy Peirce warned him of a fictitious creature called the Butter Bear.  Daddy Peirce used to feed skunks that would gather at the door of his spring house.  Eventually he had to quit because the skunks would fight over the food and spray each other.  While Dad was living at the cabin with Bessie and Daddy Peirce, she would make him oatmeal for breakfast and top it with hot, homemade applesauce that she had canned from apples she'd picked there in the mountains.  I know that when Daddy Peirce died (cancer), Bessie offered Dad one of his old typewriters, which Dad never went to get and regretted.

I know, from a rabbit hole trip down Ancestry.com that Daddy Peirce's father was a minister.  And that his mother, Mary was the daughter of James and Jane Grant.  James was born in Maine.  Jane in Vermont.

Anyway - all of that to say, I partied in my late great-grandfather's house - with the wormy chestnut paneling, and the high ceilings, and the memories of several generations.  And it started pouring five minutes after the party started.  So, we got darn lucky!  Really, just a great, fun time.  I laughed hard. I ate banana pudding. I got to spend time with some amazing, special women I've known for a long time.  They are great people.  I'm reminded of this fake Chelsea Clinton quote from the Bad Lip Reading video of the Democratic Convention:

I have  no idea why, but that makes me laugh.  Hard. I wouldn't mind if my nickname were Spider-bomb. 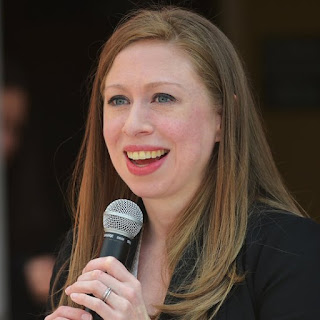 Meanwhile, work is great.  I have some training tomorrow, and I think it'll be decent.

My life is good.  I'm grateful.

It's the best of all possible worlds.