on July 20, 2017
Work is good.  Challenging, but good.  We're in the middle of a total maelstrom of activity. It's exciting.  But it will wear you out.  Yes, sirree, Bob.  One of my colleagues today mentioned how tired I looked.  Uh...thanks?

I thought I was looking pretty good.  This is a photo of me from the weekend - my sister took it for me.  Living room of my childhood home. 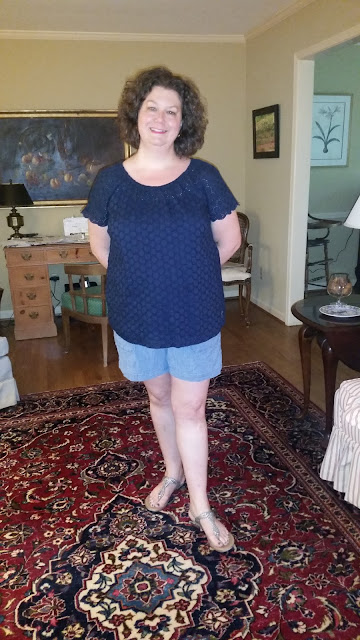 I went cold turkey off of candy today.  I had been hitting it hard, and it makes me feel like garbage, so...

I ate about a pound of cherries at work instead of hitting the candy bowl.  Which...is probably not a great decision -  but they were delightful.

I have a few projects happening outside of work.

The big one is mole removal.  I'm not talking vermin.  I mean a small, raised brown mark on my face. Next to my nose, in fact.  I purchased some mole removal cream off Amazon.  It's possibly snake oil, but it was not expensive, and worst case, I end up going to my dermatologist to get her to slice me up.

But I think there's a strong chance it'll diminish  it somewhat, if not get rid of it altogether.   I'll put pictures up. Unless it eats a hole in my face.  Nobody wants to see that.

I've got a ton do this weekend, and I don't want to do much of anything but rest up.

And maybe eat some more cherries.  They're the bomb.