on July 29, 2017
So, yesterday, was kind of a weird day.  The day before yesterday, my team and I got our asses handed to us about a project we had bungled.  It was brutal.  I stayed late that night to get my ducks in a row, and I left feeling tired and defeated.

Which brings us to yesterday, 7:30 AM.  I was reading my e mail at the doctor's office, waiting on getting some labs done.  And to my surprise, there was a message that said, "Effective Immediately, stop work on this project until further notice.  Here are your new priorities."  Well, of course, I assumed we had botched it badly enough to screw up the contract, or...something...

My colleague assured me that we didn't hold that kind of power.

As it turns out, he was right.

The reason we got a cease and desist was bigger.  It's bigger than you and you are not me.

So, we were working with the State of Alabama to implement Regional Care Organizations - basically, assisting Medicare patients to make sure they get the care and services they need.

And then, around 7PM Central Wednesday night, the Alabama Medicaid Agency and Governor Kay Ivey announced that they had decided to stop pursuing the Regional Care Organization initiative.  Effective immediately. 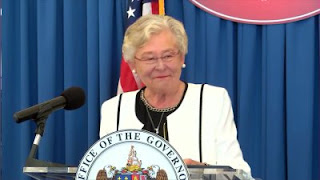 Now, for me, it sucks on a small level.  But for the hundreds of people who have put several years into this project, it sucks on a big level.  And for the people it could have potentially helped, well, that sucks, too.

So, yesterday, we processed that information.  On one hand, we get our lives back.  On the other hand, we have some folks who poured their lives into Alabama for a long time, and I feel bad for them.  I really appreciated the fact that our management was so forthcoming with information and reassurance.  It's a different world.

And this morning, I woke up to some great news.  Senators Collins, Murkowski and McCain all voted with the Democrats, and Obamacare won't be repealed.  Which is good news.  For me.  For my company, and for the people who will continue to benefit from Obamacare.

Now, I love me some John McCain.  I know that's odd for a Democrat to say, but here's the thing.  I respect John McCain.  He's authentic, he's a hero, he served his country in ways I cannot begin to imagine.  I think he was given some bad intel and counsel in making Sarah Palin his VP choice.  She's horrendous, but he needed to make a bold choice.  And he did.  It was just bold-shitty, not bold-amazing.

But I don't think all Democrats are saints, or that all Republicans are evil.  People are complex, and it's not binary.

So, thanks, Senator McCain.

But let us not forget the two other Senators who made this possible.

And they're from two great states - Alaska and Maine - states I love, with people living there who are very important to me.

So, Senator Lisa Murkowski and Senator Susan Collins - THANK YOU!!!

Chuck Baudelaire said…
That...sucks really bad for Alabamians, and I hope it isn't a harbinger of cruel healthcare decisions to come in other states (I mean, other than here in Texas, which of course has built its brand on cruel healthcare decisions on behalf of its citizens). I understand those bad days when work becomes way more important and ugly than it should be in our daily lives. Victories like the defeat of Trumpcare don't mitigate them entirely...but they do help.
July 30, 2017 at 6:50 PM