What's that you say?

on June 17, 2017
I am rounding the corner on three weeks of training, and it's been really good.  The weekends actually go better than I had anticipated.  Last night, we got done with our day and I had dinner at the bar with my boss's boss - we talked about how we got to where we were, and why we do what we do.  She and I have, I believe, some good common ground, and I enjoyed talking with her.

I stayed up kind of late last night watching crap TV and reading.  I reread a book I enjoyed as a child, and it kind of tore at me.

It's called Autumn Street, by Lois Lowry.  If you are of a certain age and liked to read and were a girl, you might remember her Anastasia Krupnik books.   She also wrote The Giver.

Autumn Street is a book about a family during WW2.  The mother, pregnant moves back home with her two daughters, Jess and Liz, to her father and stepmother's home in Pennsylvania.  The father has been sent to Germany to fight.  The story is from Liz's perspective - she's a first grader, and she's somewhat in the shadow of her older sister who is quieter, neater and blends in a bit.  Liz befriends the black cook and her grandson. 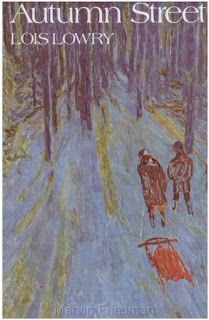 It's a series of vignettes that take place roughly over a year, and it's sad as hell, but really lovely, too.  At the end, you learn that it's semi-autobiographical, and Ms. Lowry wrote it based on her childhood.  You can get it on Kindle, and I highly recommend it.

While we're on YA (young adult) literature, I can also recommend the newish book Tell Me Three Things by Julie Buxbaum.  It's kind of a wish-fulfillment novel to me.  A teenage girl's mother dies, and her father meets and falls in love with someone he meets in a grieving spouses group.  She is uprooted from her home in middle class Chicago to a rich neighborhood in Los Angeles.  She's miserable, and spends her first three or four days of school counting minutes and hours of her life without her mother.  Then, she gets an e mail from an anonymous writer telling her he's going to help her survive the next two years at the school.

It's part love story, part romcom, part "very special episode".  But as someone who lost a much loved parent, it got to me.  I read it last weekend while washing my clothes at the Laundromat.   I cried a bunch.  As you will while reading sad books at the laundromat.

Both of those books are really moving.  When I was growing up, I loved Lois Lowry.  She wrote a few books that stuck with me.  A Summer to Die; Find a Stranger, Say Goodbye; and then one that I just love.  Taking Care of Terrific.   I would love to meet her and tell her that when I was in HS and College, I'd take several of her books (and a few others) out of the library and read them, just to celebrate my freedom.

In fact, I wouldn't mind throwing a party for some of my favorite YA Writers so that I could fan-girl for a few hours:

I'm sure a lot of authors who shaped my childhood, and my adult childhood are gone.

Anyway, all this to say - I've done some pleasure reading on this trip.  I've also downloaded a few new tunes to my phone.  It's a new season, you know.