It's time to play the game!

on June 18, 2017
It's Father's Day, and I have some complicated griefy feelings surrounding that, I went ahead and put a little message on Facebook.  Remembering my Dad and celebrating my friends who are dads. I tried to keep it light.

Here, I thought I'd get a little more personal.

Love of birdwatching and nature in general
Avid readers
Enthusiastic, good cooks
Never met a stranger
Could talk to anyone about anything
Very insecure socially and tend to overcompensate at parties by being "ON"
Cursing
Caretakers
Empaths
Tendency to annoy and piss people off
Love of travel
Enjoyed adventures together
Sense of humor
Hair color, texture
Tendency to gain weight
Love animals
Intelligent
Charming
Love of learning
Musical Theater
Storytelling 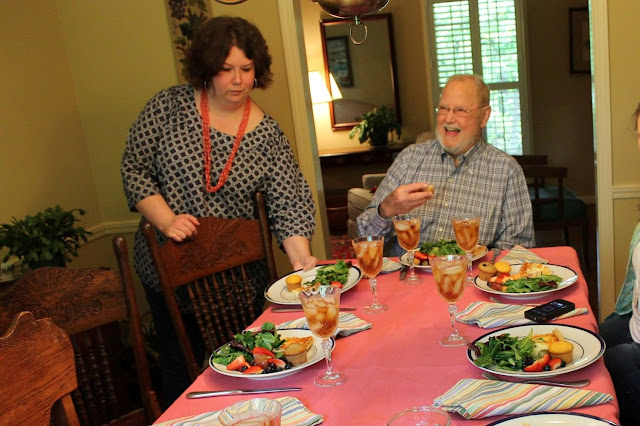 Here are some differences:

Dad didn't like being touched, much.  He needed tons of personal space.
I love massages, I hug and touch people when I talk.
Dad could not spell for shit.
I often helped him with his grocery list and doctors forms.  In Elementary school.
Dad was a math and science genius
I made Ds in HS alegebra
Dad could build anything
I am hopeless with tools
Dad was, I think, a better spouse than I have been
Dad wore suits to work, always dressed sharp, everything was always pressed even his shorts.
I don't own a suit.  I favor wash and wear.  I haven't touched my iron in years.
Dad played sports in school - soccer, baseball, football
I lettered in Chorus and Drama
Dad knew all about guns and was an excellent shot
I hate guns and can't shoot worth a damn
Him:  Georgia Tech
Me: UGA
Eye Color - his were green, mine are brown
His parents were terrible to him
Mine were amazing

That last one is the one that matters most.  But if it were between him being alive but sick, and dead.  I think he made the right choice.

Hug your father.  In absence of that, hug any father!