I had a crazy long weekend.  Friday, I drove to Atlanta, got there late and went to bed.  At 5AM Saturday, I got up and drove to the cabin for work day.  I spent a good hour working on our ATV to get it running.  I didn't get it running.  I went down to and met up with folks, and I spent the rest of the day trimming overgrowth on the roads.  It was exhausting. After it was over,  I went over and visited with some of the neighbors, and then, I made the drive home.  But not before meeting this fellow sunning in the road down the mountain: 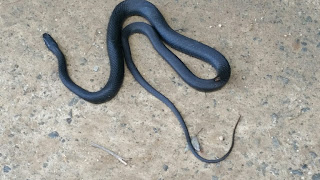 I had to get out and get a picture.  He was definitely alive, I could see him breathing, but he wasn't especially interested in me.

I don't mind snakes, especially ones like this, who eat tons of rodents and keep to themselves.

As soon as I got to Mom's house, I hustled upstairs and got a quick shower, because downstairs, Mom had a dinner party in progress.  So I joined that in progress. Talked with one woman about jewelry and how nobody dresses up anymore.  After she left, we talked movies, television and politics. Two of the couples there have children who I grew up with - and that's always a little strange, because I'm now, if not a peer, at least a conversational equal.

Mom's guests stayed late - the sign of a great party.  Mom, Jorg and I cleaned up, and then he left for the night.  Mom and I talked for awhile, I helped her order some clothes from Macy's and then finally, I went to bed.  I was incredibly sore, and I ended up taking a few Advil, and as an afterthought, I took two Benadryl to help me sleep.

I woke up around 9AM the next morning, and after packing up and some breakfast, I hit the road.  Jorg and Mom were driving to a concert and she left about 15 minutes after I did.

I definitely had a Benadryl hangover on the drive home.  But after a little traffic snag in Chattanooga, I finally got home.  Matt and I did some work in the yard, watched some TV and had dinner. We both went to bed at a decent hour.

This morning felt like Sunday - I did the Trader Joe's run, and even though the lot wasn't crowded, people were in my damn way, the whole damn time.  Damn.
But nobody has pasta sauce we like as much, and I wanted some olives, and you know - cauliflower rice there is about 50% cheaper.  It needed to happen.  I also got a ton of salty, snacky stuff.  And let's be honest - that's completely unnecessary, because I am puffy as puffy can be.  Yesterday, I hit the sugar a little too hard.  I ate some total crap trying to get a little boost of energy. I also must have been a little dehydrated, too.  I'm finally not as sore as I was yesterday, and Saturday.

This afternoon, I picked up some cupcakes and headed to a party for a short bit.  Great crowd, and I enjoyed chatting with a few people.  But honestly, I needed a nap - so I came home and took one.

And now, here I am.  Rock me like a hurricane.

So, you know.  Time to kick it old school.

Chuck Baudelaire said…
Love me some snakes. I'm constantly on the lookout for them, but never see any. I need to make a pilgrimage to the local nature preserve, which is usually - you should pardon the expression - crawling with them.
May 30, 2017 at 12:35 PM