In Lieu of the Bounce House...

on May 08, 2017
So, one of my regular readers, whose interesting, well written blog can be read here, said that my colleagues should have chipped in for my bouncy house that I threatened to use as a resignation tool (see my previous post for details).

They actually did me one better.  Within twelve hours of resigning, I got summoned into my BFF's office by one of my former managers, who now runs the Support department - I actually interviewed the guy when he started nine years ago.  They wanted to throw me a going away party.  Now, I had personally given some thought to the matter, and had it been up to me, I would have bought a ton of ice cream, suggested that everyone BYOT (bring your own topping) and I'd have been perfectly happy. Typically, we go to the bar formerly know as Loser's, currently know as Old School which is across the parking lot from our offices. But I'm not a big drinker, and it's loud, and I happened to be leaving on Cinco de Mayo, so that seemed like a headache.

Anyway, my friends had a plan, and they were pretty stoked - they wanted to throw a gathering at the skating rink.

Here's what you should know.  I am a terrible skater.  In high school, I flat out lied that I could skate to get a part in a musical.  The fact that I couldn't skate (or dance), and was a member of a group whose primary function in the musical was to do those things, became my shtick within the show.  I could sing, and that was good.  Anyway.  I'm a terrible skater.  I fall.  I'm fearful. But I also love a creative idea, so, let's do it!

As soon as it was settled, I decided I wanted a special shirt to wear to my shindig, so I found a place that could create what I wanted.  For those of you who are in the Nashville area, I highly recommend  C&C Shirt Works at Rivergate Mall in Gallatin.  They killed it.  I told them what I wanted, gave them the shirt, and one week later, I had my masterpiece.  While I was designing my shirt, I noticed a stock design that I fell in love with, and I had two more shirts made - one for each party host. 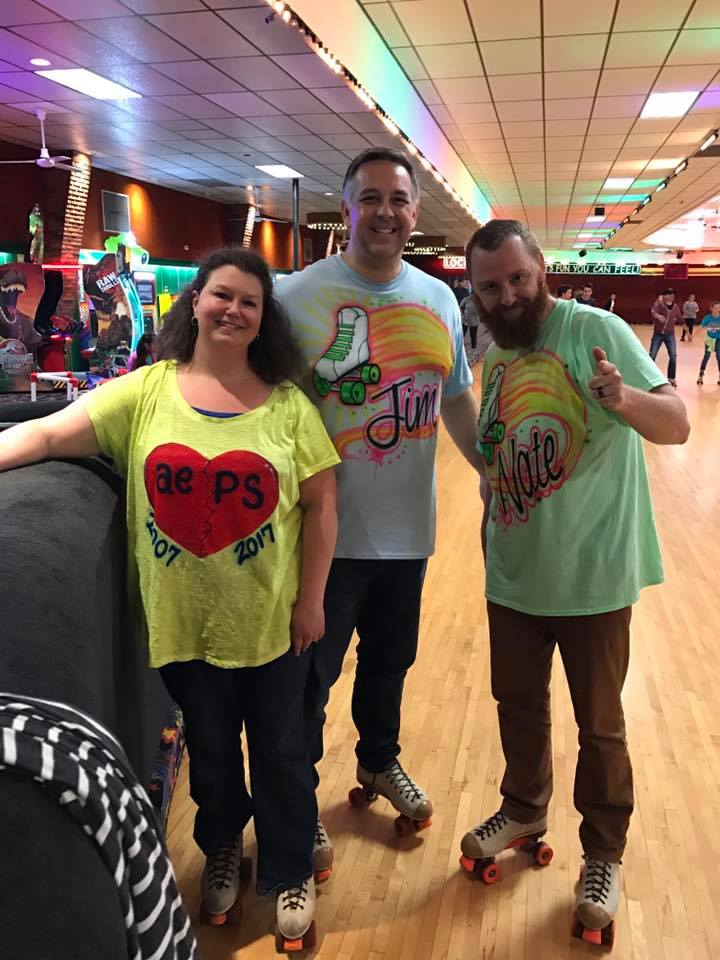 Mine is a broken heart with my initials (ae) and PureSafety (PS) with the dates of our "relationship".  Jim and Nate have the skate with acid trail and their names.   Honestly, I think theirs were way better than mine.  I should have tripled down and gotten matchy-matchy.

It was a nice little gathering - I enjoyed time with all my people, and I didn't fall.  Mostly because I didn't get on the rink other than for this picture. 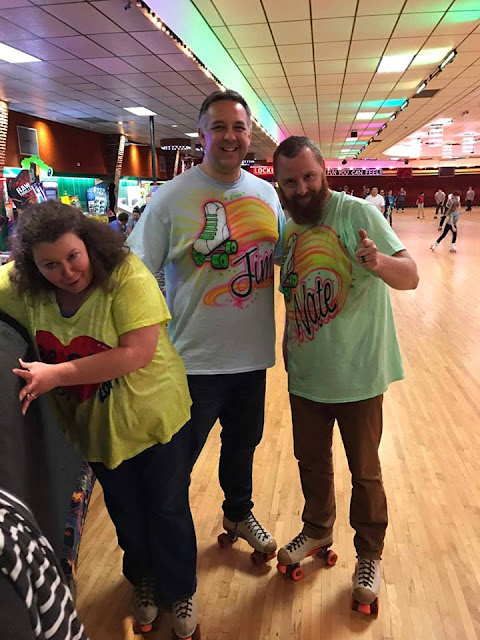 And this one.  Thankfully, my friend Keith sent me both.

So, we had fun.  It was laid back, I didn't die, and I got to spend time with friends.  On my last day, my friends in Professional Learning Services (the people who create material that is featured on the PureSafety Learning Manangement System), fed me.  Tres Leches cake, Pimiento Cheese sandwiches, stuffing balls...  My team handled breakfast.  Pastries, bagels. I was definitely shown a lot of love.  Lots of hugs and so on.

Today was day one at the new gig - it was orientation.  They sent me to the mothership, in Chattanooga.  I feel good about what lies ahead.

Tomorrow, I get my desk, I meet my colleagues, and I get to work.  As you will.

But it ended well, it'll begin well - I feel good about all of it.

Christopher said…
Your shirt is a nice tribute to your time there and how bittersweet leaving is, although Jim's and Nick's are pretty cool. As someone who also can barely stay vertical on wheels I hope you enjoyed your one last skate with Mary Jane.
May 9, 2017 at 3:43 PM