on May 13, 2017
I finished up my first week at work yesterday, and all in all, it was successful.  I have a lot to learn, and that's going to take some hard work, but basically, I have a good feeling, and I am happy as a clam.

Noteworthy, every morning I'd get in the office, get to work and when I looked at the clock again, it was 10AM.  And then it was noon, and after lunch, I'd zone in and it would be 5PM all of a sudden it was Friday.  Instead of TGIF, it was ICBIF (I can't believe it's Friday).

And it's been a long time since that happened, and it felt good.  Yes, it took way too damn long to get my phone set up (user error), and I still don't have the one piece of software I need most, but... we're getting there.

I spent a lot of time on Friday setting up my travel accounts.  So, I'll be spending some time in Virginia in June.  And that's... good, I think.  If it gets too crazy, I'll deal with it, rather than eating my feelings.

To that end, my responsible eating has been good, so far.  Turns out, eating less does make a difference.  So does writing down what goes in your mouth.

I went to an escape room for my friend Jim's birthday.  It was kind of a generic place in a strip mall- we've been going to the same franchise, but wanted to mix it up.  It was a lot of fun, and for my money, I liked that the types of puzzles that required solving used a number of different skills.

After that, we hit up the new German restaurant at Opry Mills.  It was very nice - I want to go back when I can order a sausage and pretzel and drink beer.  Actually, I'd settle for red cabbage, sausage and a small beer.  That would be nice...

Meanwhile, last night, the Preds won game one of the Western Championship Finals.  In overtime.

This morning, because I had the time and motivation to do it, I popped downtown to go get my Preds jersey personalized.  I bought it last year during the All-Stars weekend, and because the place was mobbed, I waited on getting it done.  I'm glad, because at the time, I was inclined to get Carter Hutton, who was traded to the St. Louis Blues at the start of this season.  I've gone with something not specific to any one player, so I'm stoked. I'm getting it back tomorrow, I think.

Anyway, since last night's game and tomorrow's take place in Anaheim, the organization has set up a street party in the plaza outside Bridgestone Arena.  There's a huge TV.  Food trucks, and a car to smash - three hits and a cowboy hat for $20.  They painted the car with Ducks logos, colors and so on.  A scrapyard donated it. The money goes to, I think, the Preds Foundation, but it's pretty neat: 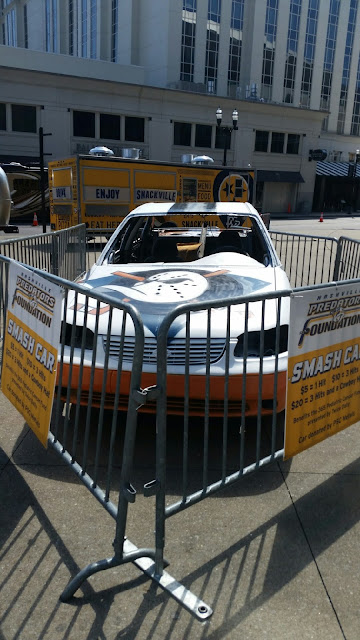 Behind some barriers a few feet away are compacted cubes of smashed metal - the two cars from the last two rounds.  The signs on them are clever.  Since we swept Chicago, the signpost is a broom.  Heh.  For the second round, it's a hockey stick.  But I just kind of got chills from it.  I love my town, and I love that people who may have their differences can come together over something that is undeniably awesome for the city. 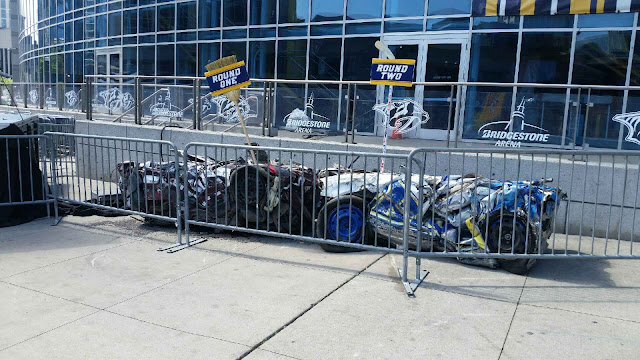 And couldn't we all use a little unity?

The rest of the weekend is going to be mostly errands.  We need healthy food in the house.  And clean clothes.  And honestly, I should bathe the dog.  Sigh.

Christopher said…
That's fantastic that you're happy at your new job--and also that the Preds are smashing the competition. Hey, suddenly we're all hockey fans and that's a cool thing. What better way to go into summer than a win on ice?
And an old friend told me the whole expression is "happy as a clam at high tide". So it's good you're immersed in work.
May 15, 2017 at 12:19 PM