What this means is that sometimes you had to use alternate methods to get information.  Once, on Election Day, I had a vague memory of a law that bars couldn't serve alcohol on the days elections were held because in the olden days, politicians would use alcohol to buy votes.  My colleagues said that didn't sound familiar, so we called the State Secretary's office to check on this.  Turns out, it was not law in Georgia, but some states still required it.

The story I wanted to tell you revolves around this.  I had friend at my second job out of school. His name was Burkes.  He was from South Georgia and we just adored each other.  We were roughly the same age, both had a quirky sense of humor, and we just clicked.  So we spent a lot of time together.  Platonic.  He's gay.  My history of befriending "the gays" goes way, way back.

One afternoon, I was in his office, and we were shooting the shit, and for some reason, we started talking about old commercials. The commercial that came up was for a product that I've never bought, and likely never will.


So, the commercial in question revolves around two old friends reminiscing about their semester abroad in college.  Paris.  This little cafe...

Our argument started there.  We disagreed on the waiter's name.  It's kind of the punchline of the commercial.

I want to state, for the record, that I knew the correct answer and I was certain of it.  But some of the others, specifically Burkes, thought I was wrong.  So, we go to Google. 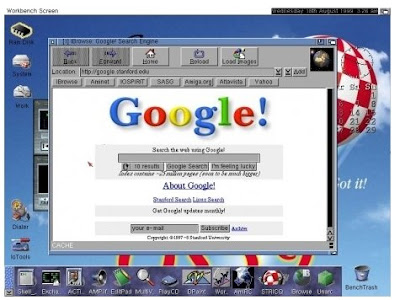 We get nothing.  Tried Ask Jeeves.  Remember Ask Jeeves?  Yeah, exactly.  Nothing.

So we did what you would do to get the answers you need.  We called The General Foods Corporation and we asked to be connected with their marketing department.  We got some nice woman on the line who took our call far more seriously than we deserved.

Ultimately, she polled her colleagues sitting nearby, and they said they were all fairly sure I was right, but we had no documentation.

Now, all I had to do was Google "international foods coffee"  and I get, as my first link, this:

Here's the waiter's name. I knew I was right.

Believe me - I love Google.  I look up dozens of things every day.  Movie quotes, hockey scores, weather, the lyrics to Maneater, crossword puzzle hints, medical diagnoses, the calories in soup, was that Scott Farkus playing Rickety Cricket's brother (it was), reverse phone number look-ups, the population of Buffalo, hard-boiled eggs in a pressure cooker, and the IMDB page for this movie Matt was watching.  And so on and on...

And I love having all that information.  I love knowing interesting shit. I love watching kittens do silly things, and knowing products that started out as one thing and ended up being something else  - Play-Doh was invented as a wallpaper cleaner.  No kidding!

I love being able to look up the name of some actor who looks familiar.  I love having at my fingertips a million recipes for chocolate icing.

I love that I can find and buy whatever I want within minutes by just typing a few works.

But you know, there was something exciting about the thrill of the hunt.  Getting a live person on speaker phone and asking a dumb question, and getting some kind of answer.  Sitting together in an office, giggling.  It was fun.

Burkes now lives in Denver.  He has a Labrador retriever.  He's still in sales, and he's good at it.   I don't know if he's dating anyone - we talk infrequently, but he's a friend.  He'll always be a friend.

And some day, we'll meet for coffee, and talk about old times.  And we'll remember the waiter's name...


Jean-Luc, people.  It was Jean-Luc.  It will always and forever be Jean-Luc.

Celebrate the moments of your life.

Christopher said…
The waiter had the same name as Captain Picard. It says something that you could forget that--mainly that Star Trek didn't provide a major frame of reference for either of you.
And as wonderful as Google is there were also benefits to actually communicating with another person, to learning a little about the inner workings of the company, and using problem-solving skills that required more than just tapping a few words into a box and hitting "Enter".