on March 05, 2017
I did a metric ton of laundry over the last two days.  About seven massive loads.  I haven't begun to fold and find homes for all of it, so basically, I've washed and dried - the rest will take some time.  I'm going to get rid of anything with a hole in it, and I know about three or four items that will be going to Goodwill.

The diet continues, and I'm not really suffering.  The best thing about being home is that I get to cook, and as it turns out, I have missed it.

Truthfully, it's kind of fun to come up with things that have flavor without calories.  I use a ton of garlic, mustard, ginger, and on and on...

Tonight, I wanted red meat, and Kroger obliged me with some pretty little petite sirloins on the cheap.  They also had some great looking asparagus, which I'm obsessed with.  Obsessed.

Ten years ago, when we were in Munich, it was Spargelzeit - Asparagus Time.  The restaurants all had a special Spargelkarte (Asparagus Menu), and there were several magazines on the newsstand about the preparation of asparagus.  I bought them.

I also ate a ton of asparagus.  Both the green stuff and the white albino penis kind.  I ate as much as I could.

Tonight, I prepped mine by tossing it in a mixture of olive oil, garlic, and dijon mustard, then roasting it in the oven.  Matt didn't want any, so I ate half of it, and I'll save the rest for tomorrow.

What Matt will eat that I won't is mushrooms.  I try, every through years, to see if my opinion has changed.  It hasn't.  And here's the thing, if the majority want it on the pizza, I can pick around it.  If I accidentally pick up a stuffed mushroom at a party, I'll eat it without gagging.  But I really, really don't like them.  And I figure since I'll eat pretty well everything else, I am allowed to be picky on that one.

But, Matt asked me just this morning if I'd fix him mushrooms some time.  And of course, I can.  And I did. 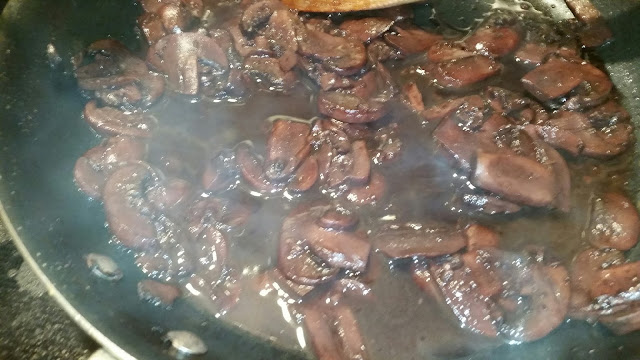 Here they are simmering in wine, garlic, beef broth, and butter.

He said they were good, so I'm happy.

I got my toenails done.  It's a little early - I typically wait til April, but here we are. 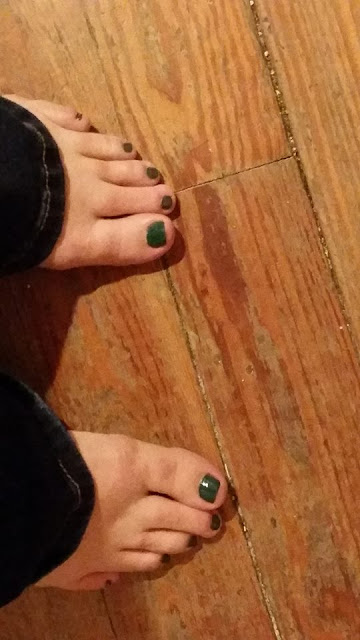 Ignore my dirty floor.  It's about the feet here, people.

So, one last thing to mention.  I had a really violent dream the other night, and I rarely, rarely have them.  I wake myself up laughing several times a year.  This one had me screaming.  The purpose of it, I think, was to be aware of some toxic influences in my life and to make sure they don't get too much water and sunlight.   I wish my conscious mind was a little more in tune...

So, that's it for tonight.  Another week starts tomorrow, and I'm sorry to say, it's not especially busy.  Which probably means I'll be updating my blog daily.  Hope I have something interesting...