Lingo was his Name-o

on March 02, 2017
Here's a dirty little secret.  College wasn't that hard.  Now, to be fair, I was a Journalism major, French minor - so I watched a ton of television, did a ton of writing, read in two languages and conjugated a bunch of irregular verbs.  There are some Left Brained people who would have some real challenges with that, but I found the academics of college reasonably easy. With just a minimum of effort, I graduated with a B average.  Had I worked a little harder, I might have graduated with honors.  But as our boy, Mark Twain once said, "Never let school interfere with your education".  I think that was my mantra throughout High School and College.

With that as backstory, I'll tell you about the hardest class I took.  It was mid-Sophomore year at UGA, and I needed a French class.  So I picked French Linguistics.

What made the class hard?  For starters, it was given entirely in French.  I was pretty decent at comprehension, except that I was three weeks into the class when I realized I had missed some instruction that we were to be spending time on exercises in the Language Lab.  Whoops.  I corrected that error quickly.  The other thing that made it hard is that it was a split level class - most of the class were, like me, undergrad students - most of them were either French or Foreign Language Ed majors. There were also two grad students.  So, they had a few extra assignments, but other than that, they were learning what we were learning.   I'll be honest, it felt like a grad level course to me.

It was hard.  I spent hours in the Language Lab trying to master sounds in the International Phonetic Alphabet, translating symbols into words, and just generally attempting to get a decent grade in that class.  I got a B, and I was happy to get it.  The thing is, though, I fell in love with linguistics.  I worked hard on that class.  I'm sure my roommate got sick of me reading passages out loud to get a certain sound right.  And I remember things from that class, and I apply them today.  I wanted to take a Linguistics class in English, but it never fit the rest of my schedule.  I wouldn't mind taking that class now, at one of the local universities. With all my free time and extra money, obviously.

Anyway, all of that is backstory to my main point.  Which is that I still do some self-study, and part of that is following this blog:


Specifically, I was recently enthralled by this post about Aphasia:

Aphasia - The Disorder that Makes You Lose Your Words

When my father had his stroke in October of 2013, it resulted in Aphasia - meaning, it basically wiped out his word bank.  He knew what he wanted to say, but he couldn't say it.   For someone like Dad, who loved to talk, it had to have been devastating.

In the first few days, one of the doctors or nurses recommended that we all sing together because music is stored in a different space than vocabulary.  So we sang all kinds of stuff - fight songs from his college, Bob Dylan, Dixie... that last one, I need to explain. We sang it in the style of a woman we all know who liked to sing that song and slowed the tempo to make it a torch song.  She was serious, we were making fun of her.  Anyway, he could sing anything.  And there were two words that came back automatically.  Hello and shit.


And he did that.  And then when he was trying to come up with a word, he'd struggle and finally end with, "Aw, shit."  The doctor told us those words were essentially automatic reflex.

The thing is, he was making progress.  Then he had, we believe, a mini-stroke  - an aftershock, if you will.  And it was a tug of war until he died in March of 2014.

He had moments of complete grasp on language.  One day, he wanted to call his best friend up in the mountains.  So I called him, explained that I was going to put Dad on the line, and they had a conversation.  It wasn't deep, but it made him happy.  Once, I went to see him in the rehab facility, and when I was leaving, he said, "Next time don't stay so long." He wasn't being mean, really.  He was tired, and he wanted me to look after Mom.  The last real thing Dad said to me was as clear as day, "I sure do love your mother".  That was about a week before he died.

I'm not trying to be a bummer.  I just think that this post on Aphasia is fascinating, and I wanted to share it, and how I had a practical application for that information.

The thing is, of course I miss Dad. Of course.

But I'm not falling apart reading an article on a topic that I find interesting.  And Dad would have appreciated that, I think.  Dad, like me, never let school interfere with his education.  But he loved to learn, and I think he'd be proud that I haven't stopped being a student of the world. 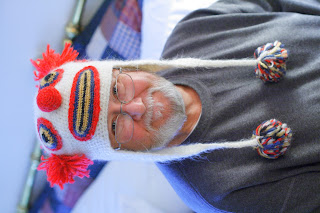 For some reason, this photo will only load sideways.  This is Dad in a clown hat that I gave him.  You can see he really loves it.  Good news, it's mine now.

Some other time, I'll tell you why I bought him that hat in the first place.  Spoiler alert:  it involves HBO Real Sex.

Christopher said…
Your father sounds amazing. I wish I could have met him.
And this brings back memories of the two linguistics courses I took in college: there was Introduction to Linguistics, required for my English major, and for fun I took Advanced Linguistics & Literary Criticism, covering an in-depth history of the English language with readings across the historic spectrum from Beowulf to The Wasteland.
I should have appreciated that class more--the professor spoke five languages including ancient Icelandic--but my education was interfering with my focus on school.
March 3, 2017 at 10:18 AM